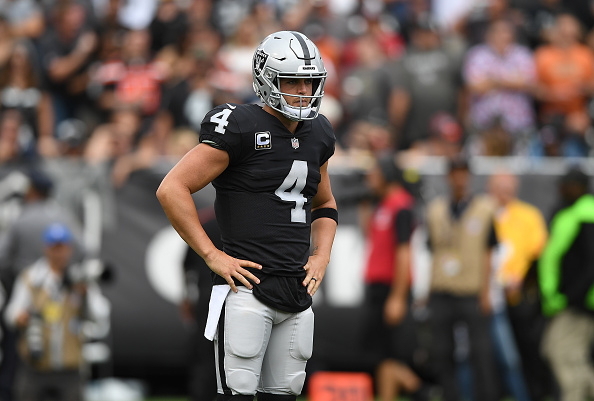 The season is very young, but the Raiders are off to an ugly start. Jon Gruden had to wait until week four to get his first win in his second tenure with the team. It’s confusing, because while the Raiders are 1-3, they have the second best offense in football. They just can’t seem to close these games out, and a big part have that has been the struggles of quarterback Derek Carr. Many blamed offensive coordinator Todd Downing for Carr’s struggles in 2017, but after four games, Carr leads the NFL in interceptions. Is he the problem? Should the team move on?

Before you start, let me assure you, there are those that think Derek Carr is the biggest problem (short of a pass rush, for obvious reasons) in Oakland. Let’s take a look.

Derek Carr is killing his team.

Derek Carr with his weekly interception to kill any possible #Raiders momentum.

On one hand, Derek Carr is 25% of the way through the best season of his career. He’s completing 71% of his passes, which is 7.2% above his career best of 63.8% in 2016, and he’s on pace for 5,492 passing yards, which would not only be significantly better than Carr’s best season (in 2015), but the most in NFL history, breaking Peyton Manning (But at this rate, probably Drew Brees’) record. Carr’s critics have always been quick to point out how low his yards per attempt is, averaging 6.6 yards per attempts throughout his career, which isn’t great, but in 2018, his 8.1 yards per attempt are top ten in the league.

After the first game in the Super Bowl era where the Raiders had a 400 yard passer (Carr), a 100 yard rusher (Marshawn Lynch), and two 100 yard receivers (Jared Cook and Amari Cooper), the Raiders are second in the NFL in total yards (441.8 per game) behind only Jared Goff’s red hot Los Angeles Rams. However, there is one big number that’s got Carr’s critics talking.

Yes, as anyone who doubts Carr will point out, Raiders haters or fans, Derek Carr leads the NFL in interceptions with seven. And while a couple of those interceptions have been understandable, some have been absolutely hideous. But for now, let’s stay positive. Let’s talk about the forgivable picks. Because believe it or not, not every pick is Carr’s fault. Of Carr’s seven interceptions, two are 50/50 jump balls that he slightly underthrew, one is a straight up drop, and another is as much Amari Cooper’s fault as it is Derek Carr’s. Don’t worry critics, we’ll get to the other three. On Carr’s first interception of the season, he sees Jared Cook lined up against John Johnson III, and just kinda tosses it up. If Carr throws it two inches higher, maybe it’s a touchdown, but unfortunately, Johnson just beats him. It’s low hanging fruit if you want to pick it, but after last year, Raiders fans can’t complain about the occasional 50/50 interception if Carr’s being aggressive and throwing the ball down the field.

Starting off year two with a 💥! Go ahead, @iamjohnthethird! 👀 pic.twitter.com/FtWGjuRIhQ

The next forgivable interception happens in week two, where after Carr scrambles around a collapsing pocket, he flings it to Amari Cooper, who simply gives up on a play that Dolphins corner Xavien Howard doesn’t. Now, this interception isn’t terrible, but it’s still a pass that Carr probably shouldn’t have thrown. Even if Cooper does keep running, he’s going to have to beat out three other Dolphins. Again, I’d rather see Carr intercepted being aggressive than anything like last season.

Fast forward to the end of that game, and it’s the same story as the Jared Cook interception in week one. Carr sees the tall, fast Martavis Bryant one-on-one with Howard and just floats it up to him. Unfortunately for Carr, it just wasn’t fast enough, and whether or not you think Bryant made enough of an effort to get the ball, interceptions are a quarterback stat.

The final understandable interception is one that falls squarely on the shoulders of Jared Cook. This week, against Cleveland, Carr forced the ball to Cook, and it goes right through his hands, into the arms of E.J. Gaines. You can blame Carr for forcing it to his tight end, but that’s what tight ends are supposed to do, make the big, physical catches over the middle of the field.

Okay, those are the forgivable ones. And it’s not that they shouldn’t be held against Carr, just that everyone calling for a change at quarterback should cool their jets a little bit. A couple iffy plays don’t justify starting A.J. McCarron.

These are the picks that are really disturbing. Maybe Carr had some confidence issues, maybe he didn’t get the offense, but these picks are ugly. Starting in week one with this gem.

This pick is just hideous. Carr can’t decide between trying Jordy Nelson on an out or throwing it away, and it doesn’t look like he makes up his mind before he lets it go. He just lofts it to the ghost of great Raiders past, and Cory Littleton rudely decides to pick it off instead. This next pick isn’t as ugly, but it’s certainly not pretty either. It was intended for good friend, Amari Cooper, and instead, it found an old foe, Marcus Peters. Which ended up being a touchdown, a crotch grab, and the back-breaker for the Raiders.

And then there’s this interception against the Browns where I thought the game might be over. Derek Carr sees Martavis Bryant streaking down the field, being covered by Gaines, and he just floated it out there. If he had put some mustard on it and sent it down the field, it might’ve been a touchdown, but it came out so soft that safety, Damarious Randall, was able to come over and pick it off.

The reality is that the Raiders would probably be 3-1 if Carr hadn’t turned the ball over. I mean, seriously, go game by game, these interceptions made the difference in every game except the one against the Denver Broncos, in which he had the most accurate performance in NFL history.

When Carr threw that first pick to Cook in the redzone? The Raiders were up three. The Rams tied it up the next drive. That pick to Littleton? The Raiders were only down ten with eight minutes left and they were driving. The pick six against Peters put the game away and put us all to sleep.

Okay, okay, so the Raiders won this game, but they almost didn’t, thanks to Carr’s interceptions. After Carr underthrew Bryant and was intercepted, the Browns zipped into the endzone, giving them a 14 point lead with 7:26 left in the third quarter. Baker Mayfield fumbles his next drive away and the Raiders roared back, but that pick forced the team to pull off a miraculous comeback.

About That Ugly Truth…

Having said that, the damage that Carr’s interceptions have done isn’t the ugly truth. Nope, that’s not an ugly truth at all. For those looking to discredit Carr, that truth looks like it belongs in a magazine next to Tom Brady’s wife. The ugly truth? It’s simple. The Raiders wouldn’t have been close without Derek Carr. Maybe it’s because the Raider Nation is impatient, or maybe it’s because 2016 Derek Carr looked like a bonafide elite quarterback, but a vocal minority has been spoiled by Carr’s quarterback play, regardless of how inconsistent or frustrating it might be.

Are a few ugly interceptions really bad enough to make you long for those guys? After trying and failing for so long to get a franchise quarterback, the Raiders have one and you want A.J. McCarron after a rough patch?

This is a hideously misinformed take. On paper, it makes a lot of sense, and the fact that the team chose not to pay Khalil Mack certainly doesn’t help, but any awareness around the league shows how terrible this take really is, and it’s easy to prove. Football might be a game, but it’s also a business, and a wildly successful one at that, and like all businesses, supply and demand are king. There is a serious demand for quarterbacks in the NFL (Don’t believe me? Read this). Five quarterbacks were taken in the first round of this year’s draft, and when you look at the money that quarterbacks have made in free agency, it’s the wild, wild west out there, and here are some examples.

Quarterbacks get paid. Can you really say that any of the four people I just mentioned are objectively better than Derek Carr? Because if the Raiders had let him walk after 2016, a season in which he was a MVP candidate, I remind you, someone else would’ve paid Carr, and they would’ve paid him more than the Raiders did, and we’d be starting Connor Cook right now. So sure, you’d like to have Khalil Mack right now, every Raiders fan would, but don’t act like it’s Derek Carr’s fault that the team couldn’t keep him.

This team is going to win or lose based on what the offense does. If Derek Carr was in Chicago and Mack stayed, this team would be in dire straights, and we’d be desperately hoping the team drafted a good quarterback next year, like we did for 12 years before we found Carr.

The bottom line? Derek Carr could be a lot better. He could be a lot more confident in the pocket, he could pick up first downs or even touchdowns with his legs. If Carr doesn’t cut down his turnovers, this team isn’t going anywhere. However, pump the brakes on the “move on from Carr” tweets, and spare me the “put A.J. McCarron in” nonsense, because Carr is the man, whether you like or not. And if you don’t? Try telling Jon Gruden. I just spent an hour apologizing for him, but I don’t love him anywhere near as much as Gruden does.

Jon Gruden doesn’t want to hear anything about Derek Carr not playing well over all this season. #Raiders pic.twitter.com/NpJk3XUrCk

Carr is only going to get better. Week by week, he understands the offense a little bit better and executes the plays with slightly more confidence. He’s still the same guy that helped lead the Raiders to 12 wins in 2016, and if we’re being honest, it’s a little ridiculous to expect him to have mastered a brand new offense in a couple of months. Gruden isn’t going anywhere, Carr isn’t going anywhere, and hopefully that kind of consistency will help the kid from Fresno State achieve highs we only could’ve dreamed of with Bill Musgrave.