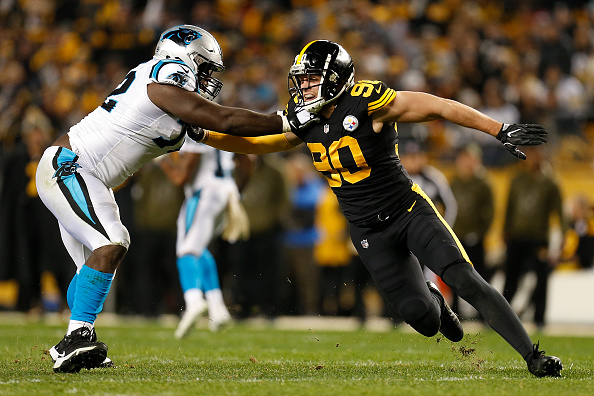 If the season ended right now, Ben Roethlisberger‘s Pittsburgh Steelers would be the AFC’s third seed. They’d have to host their division rivals, Joe Mixon and the Cincinnati Bengals, before taking on Tom Brady and the New England Patriots. While technically only the conference’s third best team, I believe the Steel Curtain may crash down on the AFC yet again in 2018.

Beware the Pittsburgh Steelers: A Contender Under the Radar

Many were quick to pull the plug on the Steelers after a 1-2-1 start, and it’s easy to see why. They couldn’t beat the Cleveland Browns, Patrick Mahomes went to town on their defense, and their only win was a three pointer against Ryan Fitzpatrick and the Tampa Bay Buccaneers on Monday Night Football.

Heading into a week five game against Matt Ryan‘s Atlanta Falcons, it was a must-win. The Bengals and Baltimore Ravens were both 3-1, and they had the same record as the Cleveland Browns, who were still riding the high of Baker Mayfield‘s debut. If the Steelers, who had allowed at least 21 points in each of the first four games, couldn’t contain Julio Jones and beat Atlanta, their season was as good as over.

Fortunately for those who wave terrible towels, the Steelers blew Atlanta out, winning 41-17. This game set the tone for the rest of Pittsburgh’s season. Big Ben threw three touchdowns, James Conner had 185 total yards and two rushing touchdowns, and Antonio Brown had his best game of the season, catching six passes for 101 yards and two touchdowns. It wasn’t just Pittsburgh’s offense that showed out either. Second year pass rusher, T.J. Watt had three of the team’s six sacks, and they held Matt Ryan and company in check, limiting Julio Jones to just 62 yards.

Since then, the Steelers are undefeated, winning their fifth game in a row in dominating fashion when they put 52 points up on Luke Kuechly and the Carolina Panthers, a team vying for the playoffs in a much more competitive conference. Over that span, Pittsburgh has been outstanding. After a rough start, the team hasn’t allowed more than 21 points in a game, and they’re averaging 35 points a contest. They’re averaging a win margin of nearly two touchdowns a game.

As for the stars of the Falcons game, James Conner is averaging over 100 rushing yards a contest, Antonio Brown has at least one touchdown in every game, and Roethlisberger has thrown 13 touchdowns to only two interceptions while averaging around 300 passing yards a game. Meanwhile T.J. Watt has five sacks over that span, that’s more than the entire Oakland Raider roster has.

The other contenders in the AFC are easily the Kansas City Chiefs and New England Patriots. The Houston Texans are dangerous too, especially with the addition of Demaryius Thomas, but I’m not sure I trust them. It wouldn’t surprise me if Philip Rivers and the Los Angeles Chargers upset a team or two, but history doesn’t speak fondly of the Chargers. While we’re talking history, it scoffs at Andy Dalton‘s Cincinnati Bengals, the other AFC squad vying for a playoff spot. Speaking of history…

Andy Reid‘s quarterbacks have never done what Patrick Mahomes is doing this season. With a few weeks left, Mahomes is the obvious MVP. He’s on pace for a historically brilliant season, and with the exception of a closely contested, weirdly under-officiated game against the Patriots, his Chiefs might be undefeated. But when it comes to Kansas City, I have two concerns.

Historically, Andy Reid’s playoff teams have a sad history of falling apart. Over his career, Reid has a losing record in the post-season. Since he became the head coach of the Philadelphia Eagles in 1999, Reid is 11-13 in playoff games. That doesn’t sound too bad, because you can’t expect a guy without a Super Bowl win to have a fantastic record, but he was 10-9 with the Eagles. That’s right, he’s 1-4 with the Kansas City Chiefs.

His four losses have been close, losing by less than a touchdown each time, and in fact, less than a field goal on three of the four occasions, but it’s how they’ve lost that paints an unflattering image of Reid in the post-season.

Against Andrew Luck and the Indianapolis Colts in 2013, his Chiefs were up 38-10 in the third quarter, only to lose 45-44 late in the fourth quarter. Against the New England Patriots in 2016, Reid was just outcoached, and couldn’t hang with the Patriots. His Chiefs lost a reall ugly game to, guess who, the Steelers, in 2017, where he just couldn’t get his team in the endzone. And then last year? He had a 21-3 lead against Marcus Mariota, and in typical Andy Reid fashion, he completely blew it, losing 22-21.

But again, Reid has never had someone like Mahomes under center. Even the likes of Donovan McNabb and Alex Smith never sniffed what Mahomes is doing this season. His offense, led by Mahomes, Tyreek Hill, and even Kareem Hunt, are on a whole other level. So why don’t I buy this Chiefs team? It’s easy.

As good as Kansas City’s offense is (number one in the league), the defense is just as bad. Kansas City’s defense is putrid. They’ve given up 3,847 yards so far this year. That’s 427 yards a game. For reference, the Jacksonville Jaguars, who have allowed the fewest yards this season, have given up only 2,506. The Oakland Raiders, who made Nick Mullens look like Joe Montana, have only given up 3,257 yards.

Enter Pittsburgh’s explosive offense. It’s easy to forget, but the Steelers were able to put up 37 points on this defense in week two. Now that Pittsburgh’s defense has sorted themselves out a little bit, and the NFL finally has some real film of Patrick Mahomes, who is to say that the Steelers couldn’t realistically beat the Chiefs?

Which leads to the real problem. Because as any Steelers fan can tell you, Kansas City hasn’t been the team giving Pittsburgh problems over the last twenty years. That’s where the hoodie comes into play.

This is really simple. The Pittsburgh Steelers have been knocking on New England’s door for years now. Tom Brady is 11-2 against Pittsburgh in his career, including two playoff victories, the most recent being the 2017 AFC Championship game. Throw in last December’s Jesse James controversy, and it’s safe to say these two teams have some bad blood.

By looking up the last three games, here’s what I’ve been able to determine. The Steelers just haven’t gotten to Brady. Even when they had James Harrison, the Patriots didn’t sack Brady more than twice in a game. Historically, teams that beat Brady do so by hitting him. If you look at every game that Tom Brady has lost over the last five years, he’s been hit at least five times. If the Steelers want to finally beat Tom Brady, they’ll need to hit him.

To quote the late Al Davis, “the quarterback must go down, and he most go down hard” and the Steelers have just the right crew to hit Brady. So far this season, the Steelers have 31 sacks. They’re averaging three sacks a game right now, and with a game against Derek Carr‘s offensive line in a few weeks, that number should skyrocket, just ask the San Francisco 49ers.

As long as Big Ben continues to protect the ball, James Conner keeps balling out, and Antonio Brown doesn’t randomly stop being the best receiver in football, they’ll be able to compete with a Patriots team that isn’t quite as good as they’ve been in years past.

New England is still very good, don’t get me wrong, but they’re just not as elite as they’ve been in the past. Brady is turning the ball over more than he has in the past, and they just can’t seem to get healthy. Ideally, you want the best version of your team to beat the best version of their team, but the Patriots have spent the better part of twenty years exploiting weaknesses and disadvantages, so maybe it’s time they got a taste of their own medicine.

The two teams face off in a couple of weeks and we’ll get a better idea of what they’re dealing with. Hopefully the Steelers win, or at least gain insight to help in the playoffs. Otherwise we’ll just end up with another Patriots Super Bowl game, hopefully one where they lose to a certain team from Louisiana.

The bottom line is this. The Steelers are getting hot as the weather is getting cold. The Steelers are starting to click in all three phases of the game. Even Chris Boswell, who had a rough start, hasn’t missed a field goal since September. This is the most complete team in the AFC and they could make a real run at the Lamar Hunt trophy.