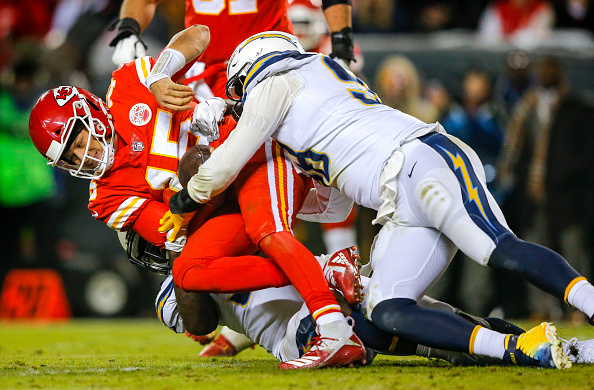 When the season started, expectations for Patrick Mahomes and the Kansas City Chiefs were lukewarm at best. They traded Alex Smith and Marcus Peters, both cornerstones of their 2017 success, away and were relying on younger, unproven talent to carry the team. Fast-forward to December and not only do the Chiefs have the AFC’s best record, but Mahomes is the early favorite to win MVP. How can AFC contenders possibly hope to stop this machine? Like this.

How to Stop (Or at Least Slow Down) Pat Mahomes

In order to break down how to stop Mahomes, you have to look at what he does well. Mahomes has a cannon for an arm, is adequately accurate, and is just mobile enough to extend the play with his legs. But that’s not what makes him scary. What makes him scary is his ability to throw the ball on the run.

Maybe it’s his baseball background (his father, also named Pat Mahomes, a major league pitcher in the late 90’s) or maybe even his basketball experience (he played until college), but Mahomes can sling it from anywhere, even when his feet aren’t set. So assuming a pass rusher even gets near Mahomes before he throws the ball, he can escape and deliver the ball anywhere on the field.

The Key to Big Plays

While Mahomes can run the ball, that’s not what makes extending the play scary. The Chiefs have one of the fastest and most exciting offenses in football. Even the best corner in football isn’t going to stick with Tyreek Hill for very long, and no linebacker can hang with Travis Kelce for more than a couple of seconds. Mahomes can extend the play with his legs, and then he has the arm to get the ball to his speedsters, streaking down the sideline.

Ironically, this is the key to stopping Mahomes. A crucial part of Kansas City’s offense is extending the play, allowing receivers to get open down the field. Here are some examples.

Something that I’ve seen a couple of teams do, with relative success, is keep Mahomes in the pocket, and forcing him to play conventional football. Coming out of college, Mahomes’ biggest criticisms were that he takes too many chances, and opts to play a “backyard style” instead of conventional quarterback. He gets flustered and forces plays instead of taking what’s given to him.

We’ve seen it a couple times this year, and when Mahomes is forced to stay in the pocket and can’t break outside, bad things happen. Here’s an example.

Al Davis once said that the quarterback must go down, and he must go down hard, and he was absolutely right. Hitting the quarterback has become the number one priority for defensive coordinators and players all around the world, be it pee-wee practice or Super Bowl Sunday. But against someone as lethal as Mahomes, it might be more advantageous to prioritize keeping him in between the tackles first, and all sacks that come along are just gravy.

Seal the edges, make sure you have a player in the area if he tries to step up in the pocket, and make him beat you on quick passes. So many of Mahomes’ big plays have come from second chance, outside the pocket bombs to receivers that have come open down the field.

Take Away his Weapons

Force Mahomes to prove he can beat you as a passer standing still in the pocket, and at the very least, you eliminate some of the bigger plays. As lethal as Travis Kelce and Tyreek Hill are, they’re not exactly known for their toughness. Especially Hill, whose small frame (listed at 5’10, 185 pounds) leads to ending up on the injury report every year.

As for Kelce, he’s a match-up nightmare for any defensive coordinator, but in the past, teams have been physical with him and totally thrown him off routes. As shown below.

I’m not saying this is foolproof. I’m not even saying it’s possible, as Mahomes the magician has proven to be capable of escaping from every situation. I’m just saying that the best way to beat Mahomes isn’t to try and sack him six times, but to force him to remain in the pocket and play classic pro-style football. Play physical, accountable football, and you can slow down this dynamic threat.