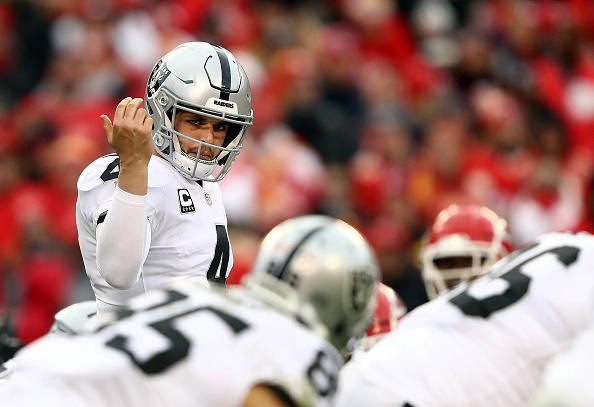 Ever since Jon Gruden took over in Oakland, analysts and critics alike have speculated that quarterback Derek Carr‘s days with the team were numbered. Gruden has a history of impatience with quarterbacks, and he’s shouldered most of the blame for the Amari Cooper and Khalil Mack trades. It’s not unfathomable to question whether the controversial coach would move on from Carr. Here’s why that move would be a mistake.

Trading Derek Carr Would Be a Mistake

Believe it or not, there are reasons for the team to move on from Carr. He’s been good for the team, but not great. He’s struggled since his breakout 2016 season, and thanks to well-written contract, the Raiders could move on from him without carrying too much dead money. When you consider how weak the upcoming draft class is for quarterbacks, the Raiders could probably get a huge haul for him.

As far as free agents are concerned, the best available veteran will be Tyrod Taylor. Joe Flacco is going to be traded somewhere, Blake Bortles and Eli Manning might be available, and if you back up the brinks truck, you might be able to get Nick Foles, but this is a bad year to need a quarterback. With names like those, Carr is an enticing prospect for desperate teams.

Carr’s market value is very high because of how bad this quarterback class looks, but that’s honestly why the Raiders would be foolish to move on right now. Teams are willing to give up a lot for Carr because he’s the best quarterback available, which means if they did trade him, they’re accepting a huge downgrade at the position.

The Raiders are probably two or three years away from being competitive, and they could use a few more high draft picks, which they could certainly get for Carr. If the Raiders aren’t going to compete this year, why keep a quarterback making over twenty million dollars? They could find an usher in the stands to lose football, and he’d probably do it for free. The Raiders could get a stopgap, save a ton of money, gather some draft picks, and then select a quarterback in the loaded 2020 class. What’s five first round picks when you could have six or seven? Imagine having seven first round picks with Mike Mayock in charge of scouting. That’s dangerous.

The Reality of the Situation

Here’s why that might not be the best idea. As great as a prospect might look, the draft is a crapshoot. A player can check all of the boxes and be dreadful in the NFL. The Raiders took a guy who Mel Kiper compared to John Elway with the first overall pick and he ended up being the biggest bust in NFL history. How hard is it to find a franchise quarterback? Let’s look at Oakland’s history.

Raider Nation has been spoiled by adequate quarterback play. Sure, Derek Carr isn’t Tom Brady or Aaron Rodgers. He’s not throwing 50 touchdowns like Patrick Mahomes and he still has a losing record as a starter, but fans may have forgotten what Raider Nation has had to endure under center.

Rich Gannon played his last game for the Raiders in 2004. In the ten years between Gannon’s last game and Derek Carr being drafted, the team started 15 different quarterbacks. That’s 1.5 starters a season. There were some really bad ones too. Kerry Collins, Marques Tuiasosopo, Andrew Walter, Aaron Brooks, Josh McCown, Daunte Culpepper, JaMarcus Russell, Bruce Gradkowski, Charlie Frye, Jason Campbell, Kyle Boller, Carson Palmer, Terrelle Pryor, Matt McGloin, and Matt Flynn started at quarterback during that span, and not one of them was named to a Pro Bowl.

Only one of those quarterbacks, Carson Palmer, broke 4,000 yards, and most of those yards came in garbage time. None of them threw more than 22 touchdowns and seven of them had double digit interceptions. Carr’s 2018 season was underwhelming to say the least, but it’s still significantly better than any of the seasons between 2014 and 2004.

Deja Vu All Over Again

Who’s to say the Raiders find a quarterback better than Derek Carr in these drafts? Nobody in 2019 looks as good as Carr, and assuming the Raiders are in position to draft Tua Tagovailoa or Jake Fromm, there’s no guarantee that they play as well as Carr has. You give up a B grade quarterback and completely botch his replacement? Ask Jacksonville how much good a supporting cast does you when your quarterback is terrible.

Meanwhile, Carr would likely go to a place like the New York Giants, where he’d have Saquon Barkley, Odell Beckham Jr., Evan Engram, and Sterling Shepard to play with. You think the media has been harsh about how Khalil Mack and Amari Cooper have played? Imagine if the Raiders traded the quarterback and he dominated elsewhere while the guy Gruden picked struggled to fill yet another hole on the roster.

Or what about Jacksonville? If the Jaguars sent over someone like Leonard Fournette and a first round pick, they’d have the piece they’ve been missing and they could bounce back in 2019. Wherever Carr goes, he’ll have a chance to play well, and every time he plays well, it’ll be a nightmare for the Raider Nation, just like Cooper and Mack have been.

As for Carr’s contract, this is just an example of people failing to understand supply and demand. This is painfully obvious, and no matter how much time passes, people still refuse to grasp the concept. There’s a direct correlation between having a franchise quarterback and making it to the Super Bowl. Since the year 2000, only four of 19 Super Bowls have taken place without Peyton Manning, Tom Brady, or Ben Roethlisberger, while the likes of Drew Brees, Russell Wilson, and Kurt Warner have also made appearances. Short and sweet, if you want to consistently compete for titles, you need someone special under center.

However, it’s hard to find great quarterbacks. Since 2000, in 13 of the 19 NFL drafts, quarterbacks were selected first overall. That means that 68% of the time, the worst team in football has picked a quarterback to reverse their fortunes. And of those 13 quarterbacks? Only six remain on the team that drafted them, including Baker Mayfield, Jared Goff, and Jameis Winston, who are still playing on their rookie contracts.

Simply put, it’s supply and demand. Teams need quarterbacks, but there aren’t that many great quarterbacks, so teams will do whatever it takes to get one. If the Raiders hadn’t paid Carr, someone else would’ve, and that’s a fact. The only real choice the Raiders had was whether to give him the franchise tag or to lock him down long-term, and the Raiders did the smart thing.

The simple truth is this. There will still be demand for Derek Carr in 2020. This season, he was learning Jon Gruden’s offense behind a makeshift offensive line with no weapons, and he still played adequately well. It’s hard to imagine that after another year in the system, with an improved offense, he’ll take a step back. Worst case scenario, he’ll plateau, and the Raiders will know it’s time to move on.

Sure, teams won’t be as desperate for him because of the talented quarterback draft class, but there will still be a huge market. The Minnesota Vikings gave Kirk Cousins a monster contract, and Cousins’ has had a comparable career to Carr thus far. It might be a smaller deal, but there will still be a deal, and the Raiders will know for sure whether or not Carr is their man.

The Raiders aren’t going to win the Super Bowl in 2019. Even if they nail the draft and have a good free agency period, they can compete, but this team has too many holes to be fixed overnight. The Raiders have enough cap space that they don’t really need Carr’s 22 million dollars this year, and for one more year, they won’t have to worry about the quarterback position.

Trading Carr would be like punting on second and long. Sure, it’s unlikely that he’ll get where he needs to be, but to prematurely give up when there’s still an opportunity to succeed is foolish. Carr isn’t a top five quarterback, but he’s earned one more year with the team, especially if it means only the second time in his career where he’s had the same offensive coordinator for consecutive seasons.

One thought on “Trading Derek Carr Would Be a Mistake”