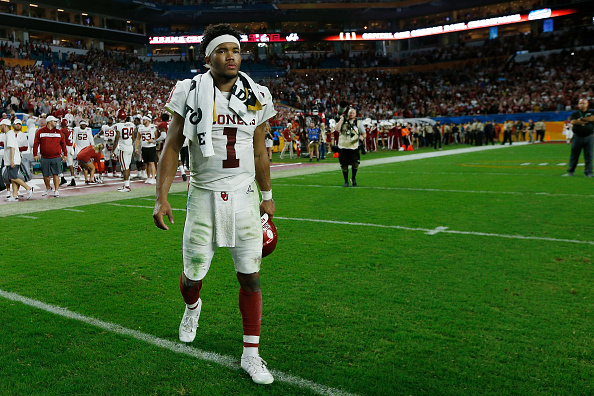 The relationship between Raider Nation and quarterback Derek Carr is a complicated one. While there’s no question that he’s the best quarterback the team has had since Rich Gannon retired, he’s also failed to live up to expectations. After a 2016 season where he was a legitimate MVP candidate, Carr has struggled to return to form. A vocal minority believes it’s time to move on, and the best way to do that is through the draft. This is where 2018 Heisman trophy winner, Kyler Murray comes into the picture. Is he a fit with the Raiders?

Kyler Murray and the NFL

First and foremost, there’s a question about whether Kyler Murray can even play football at the pro level. His listed height and weight (5’11 and 194 pounds respectively) is probably generous, and even that is questionable. As a quarterback, size is significant. Being taller allows you to see over offensive linemen and a little extra weight can cushion your body from the inevitable punishment.

That’s not to say short quarterbacks can’t succeed in the NFL. Drew Brees is only six feet tall, and he has the most passing yards in regular season history. Russell Wilson is even shorter than Brees at 5’11, and he’s arguably one of the best quarterbacks in the game. In a league where quarterbacks are protected, he’ll take fewer hits than he may have just a few years ago. It’s a leap, but not an impossible one.

Murray has a great arm, and is athletic enough to create plays with his legs. It won’t be easy, but in the right offense, with the right surrounding talent, and the right coaching, Murray can succeed in the NFL. However, Jon Gruden is not that coach.

Gruden has a penchant for acquiring veteran players. He likes smart, blue-collar players that can execute his vision, and he can’t get that from a rookie. If Gruden were to move on from Carr this off-season, it seems far more likely that he’d target a veteran like Nick Foles or Joe Flacco.

But you might be thinking that I’m underestimating Gruden’s ego. Perhaps he wants to take a young quarterback and mold him into his image, if only to prove he can. This isn’t an unreasonable question, as Gruden’s unpredictability has become an amusing, if stressful part of being a Raiders fan. However, if Gruden is going to take a quarterback to develop, it probably won’t be Murray.

Gruden’s offense is a descendant of the west coast, and he’d prefer to have a bigger quarterback that can make quick reads and all the throws. If Jon Gruden could go back and get any quarterback from history, he’d pick Peyton Manning 100 times out of 100, and has said as much in the past.

Frankly, if Gruden did take a quarterback, he’d probably take Daniel Jones from Duke. Jones has prototypical NFL size (listed as 6’5, 220 pounds), a cannon for an arm, and lived in a quick read offense. He’s athletic enough to extend plays with his legs, and has some great touch on deep balls. Not to mention, he was coached by David Cutcliffe, who coached Peyton Manning at Tennessee and Eli Manning at Ole Miss.

More fuel for this fire? Jones is on the North squad at this year’s Senior Bowl. The same North squad that Gruden and his staff will be coaching. If Gruden is hell bent on taking a quarterback, Gruden will have the best seat in the house to watch the young passer play.

Frankly, the biggest argument against drafting Kyler Murray is that the Raiders already have a quarterback. For all his perceived failures, Derek Carr is still the most reliable option the team has at the position in 2019. This team has so many holes, it would be foolish to spend a top ten pick on a position that isn’t a need. Sure, the Raiders would likely get a nice haul in return for Carr, but who is to say his replacement would be an improvement?

This is a strong pass rusher class, and the Raiders should look to fix their defense before they replace a player who is good enough for now. The next two quarterback classes are fantastic, with Trevor Lawrence just over the horizon. Instead of taking a project player that doesn’t fit the offense and might not be able to make the transition to the pros, stick with what woerks, give him another year in the offense, and revisit the possibility of drafting a quarterback early in 2020.