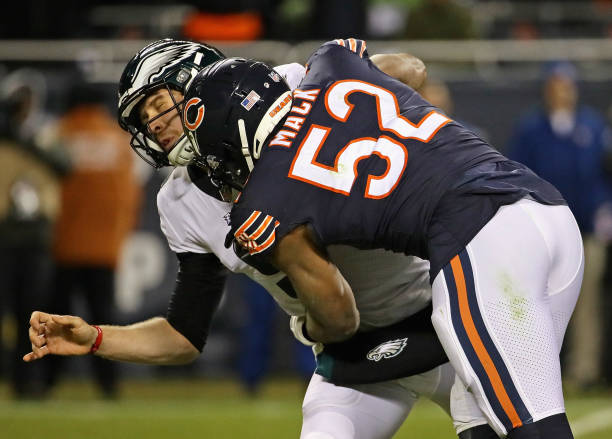 I can’t speak for all Raiders fans, but I for one am sick of hearing about the Khalil Mack and Amari Cooper trades. Every time the Raiders do anything, these trades are brought up, and after nearly a year, I’m sick of it. I understand why, it’s not often that an elite defender or a very good wide receiver are traded in their primes, but the horse is gone yet the beatings still remain. So I decided to do perform a funeral of sorts. This is it, the definitive end-all, be-all look at Oakland’s biggest trades and why we don’t need to discuss them anymore.

Once a Raider: Putting the Mack/Cooper Trades to Rest

First thing’s first, nobody in Oakland wanted to get rid of Khalil Mack. I feel like there’s this sensationalist notion flying around that the objective was to get rid of the elite pass rusher, and that simply wasn’t true. Nobody in their right mind wants to get rid of an All-Pro, defensive player of the year winning locker room leader. But ultimately, three things were true.

Khalil Mack knew what he was worth, and he wanted to get paid. The Oakland Raiders were not a Super Bowl caliber team, and they needed cash to remain competitive. And finally, and perhaps most regrettably, Joel Segal is a very good agent.

Mack, King of the Mountain

In today’s NFL, the passing game is king, and the contracts reflect that. The highest paid players in football are quarterbacks and the guys who chase them. Khalil Mack might be the very best at chasing quarterbacks. In five years, Mack averages just over ten sacks a season, and the bulk of those sacks happened as a member of a defense where he was the only pass rushing threat and the secondary was mediocre on a good day.

So when it comes time for Khalil Mack to get paid, Khalil Mack deserves just about everything he wants. To be fair, the Raiders understood this, and they tried to make him the NFL’s highest paid defensive player around the same time they extended Derek Carr’s contract. But Segal is a smart agent, and he knew that Mack would only make more money as time went on and they got closer to the end of his rookie contract.

Now it’s 2018, and while many point to the return of Jon Gruden as the reason this deal doesn’t happen, it simply isn’t the case. 2018 was the last year of Mack’s rookie contract, and he wasn’t going to play a single down until he was extended. This is a good business decision. If Mack had played on his rookie contract, he took the risk of sustaining a career ending injury, where his value would be depleted, and he’d be left with a fraction of what he would’ve made otherwise. So Mack did what many players are doing in today’s NFL, they’re exercising the only leverage they have by holding out.

This is where things get dicey, because frankly, Mark Davis is the reason this trade happens. Without getting into how much cash that Davis does or doesn’t have for signing bonuses, he took contract negotiations personally. Segal, who gets a cut of Mack’s contract, is a businessman, and he’s not concerned with Davis’ feelings. His priority is getting his client paid, by any means necessary.

Davis, operating under the assumption that Mack will “pull a Le’Veon Bell” and hold out if he didn’t get paid, began listening to calls from other teams about a trade. Eventually, Chicago came calling with an offer they couldn’t refuse.

This is where I’d like to make a point that I think has been mostly lost on people. The Raiders got the best deal that they could for Mack, because they assumed he was gone regardless. They didn’t want draft capital and then try to move a valuable asset, they were trying to get the most out of a bad situation.

So when someone says “The Raiders traded Khalil Mack for Josh Jacobs,” they don’t know what they’re talking about. Firstly, the Raiders got two first round picks, not just one. Secondly, I’m sure Gruden and Mike Mayock love Josh Jacobs, but if they were offered Mack for him right now, they’d take it in a heartbeat.

It’s like wrecking your car. The damage is done, it can’t be undone, and now you have to make the best of a bad situation. If you can get something for your car, it’ll make moving forward a lot easier. If you wreck your dream car, and then get something serviceable, nobody’s going to say you traded your dream car in for what you have now.

Yes, I compared the Mack debacle to a car wreck, don’t read too much into it.

The Silver (and Black) Lining

The silver lining for the Raiders is that losing Khalil Mack wasn’t the end of the world. They did add two first round picks, and they didn’t have to pay Khalil Mack what the Chicago Bears did. Looking at the off-season the Bears had, it’s obvious that they were a little strapped for cash. Meanwhile the Raiders went on a bit of a shopping spree, adding Antonio Brown, Trent Brown, Brandon Marshall, Vontaze Burfict, Lamarcus Joyner, Nevin Lawson, Tyrell Williams, Luke Willson, and a few other pieces to a bad roster.

Looking at the Raider roster, they’ve made sweeping improvements across the board, and I’m not sure they can do that if they paid Mack what the Bears did. Counting cap can be a little confusing, and there are different opinions about how much the Raiders could’ve done with the money, but I’m just gonna stick to the basics. Less money for Mack means more money for the Raiders, and despite what Biggie said, more money doesn’t always mean more problems.

I almost forgot about Amari Cooper, and that’s because, if we’re being honest, I don’t think the Raiders need to defend that trade. Amari Cooper is a very, very good wide receiver, but he’s not elite, and that has nothing to do with his talent.

On a good day, Amari Cooper is one of the best receivers in football. He has games where he’s all over the place and there’s nothing the secondary can do to stop him. But he also has games where you forget he’s even playing. Cooper has two career 200 yard games where he was seemingly unstoppable, once in Oakland against Kansas City, and once in Dallas against Philadelphia. Cooper also has 31 games with under 50 yards receiving, and four of those took place in the second half of this season with the Cowboys.

Considering the Raiders got Antonio Brown, who even though he’s a little older, is in a different hemisphere from Cooper, for a third and a fifth, getting a first round pick for a guy who is set to make elite receiver money is a solid trade. Hell, the New England Patriots got Josh Gordon and a seventh round pick for only a fifth.

The Past is The Past

The past is in the past. There’s nothing the Raiders, or more specifically, the Raider Nation, can do about these trades. Barring a Charles Woodson-esque comeback, neither man will ever wear the silver and black of the Oakland Raiders again. The echoes of this trade have changed the NFL, and will continue to do so, but until Oakland’s rookie class retires and we revisit this trade, there’s no need to incessantly bring it up every time the Raiders do anything. The Raiders have a new foundation for the future, the Bears have a Hall of Fame pass rusher, and the Dallas Cowboys completely transformed their offense with a very good wide receiver.