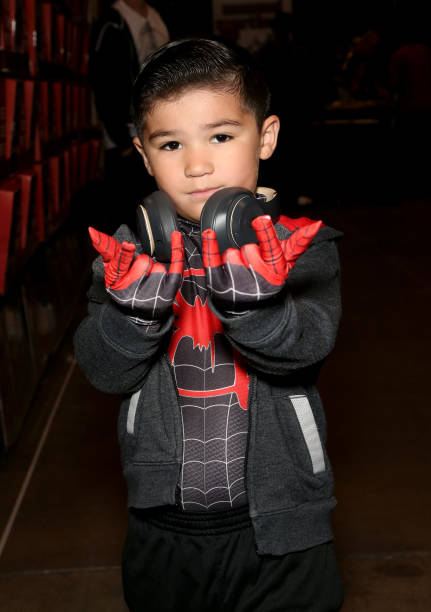 So confession, when I started writing this article, it wasn’t about the best superhero film ever made. I wasn’t even thinking about movies outside of the Spider-Verse. With the recent news about the Sony-Disney drama, I set out to rank all the Spider-Man movies. That list will still eventually show up on this website, but when I started writing about the only animated Spider-Man to hit the big screen, my fingers just wouldn’t stop typing.

Ultimately, I’d written more about this one movie than I had about the other seven major Spider-Man movies combined. Because what this movie provides has nothing to do with cinematic universes or iconic villains. This movie perfectly embodies not only what we love about Spider-Man, but what we love about superheroes in general. So without further ado, here’s why I think Spider-Man: Into the Spider-Verse is not only the best Spidey-Flick, but the best superhero movie altogether.

Spider-Man: Into the Spider-Verse Is the Best Superhero Movie Ever Made

First thing’s first, I know that there have been some serious comic book heavy hitters recently, and Spider-Man: Into the Spider-Verse (ITSV moving forward) has some serious competition. How can I say ITSV is better than Avengers: Endgame or even Infinity War when they shattered not only hearts, but box office records as well? Leaving the cinematic masterpiece that is the MCU, what about Christopher Nolan’s Dark Knight Trilogy? Christian Bale’s Bruce Wayne and even Heath Ledger’s Joker put iconic performances on film and there’s no denying that. But… here’s the thing…

There’s this idea that certain films from the MCU should be considered the best superhero movie ever made, simply because of their incredible scope. Building a cinematic universe is something that, if we’re being honest, only Disney has pulled off so far. What they accomplished between Iron Man in 2008 and Endgame in 2019 can’t be overstated. But…

If you’d never seen any of the other MCU movies, and you sat down to watch Infinity War, would you be able to enjoy it? Maybe you’d be able to take in some of the action some of the time, but there are so many characters and story-lines that were intricately built over several movies that you’d be helplessly lost.

I’m not trying to take anything away from the MCU, I’m as blown away by the mere scale as anyone, but as far as one movie is concerned… let’s just say the whole is greater than the sum of it’s parts.

Batman is my favorite superhero, and at the beginning of the MCU, I would feverishly debate why Nolan’s trilogy was better than the giant CGI quip-fest for hours on end. I’d reference how gritty and real the Dark Knight movies were, praising Nolan for taking as cartoonish as a man that dresses up like a bat and turning it into an objectively enjoyable film experience.

For two reasons, I think this actually disqualifies these movies from contention. Firstly, every DC movie since has tried to replicate Nolan’s formula and it’s been a hideous disaster. Secondly, by transforming Batman into an action-drama, we lose the camp that defines a super hero movie. The themes of fear, chaos, and pain create a fantastically enjoyable cinematic trilogy to the point where… they’re hardly superhero movies.

I don’t know about you, but I’ve never felt the urge to fake my death and move somewhere tropical with a beautiful thief because the pressures of being angsty and brooding all the time were too much for me. Sorry Bruce.

So now that we’re just talking about individual comic book, superhero movies… let’s break down what makes ITSV so fantastic.

Reading Into “Into The Spider-Verse”

For me, there are two themes that make ITSV not only the best Spider-Man flick, but the best superhero movie in general. They’re things that have made Spider-Man one of the most successful superhero franchises across many platforms but that this movie in particular nailed perfectly.

The first message is simple, and it’s something the movie kinda hits you over the head with. Anyone can be Spider-Man. After Chris Pine Peter Parker (yes, that was Chris Pine) is killed, Mary Jane gives a passionate speech in front of a ton of people wearing Spider-Man masks that her “favorite thing about Peter is that he made us each feel powerful. We all have powers of one kind or another. But in our own way, we are all Spider-man. And we’re all counting on you.”

The “with great power comes great responsibility” quote appears in every adaptation of Spider-Man eventually, but typically it just focuses on him using the power, not struggling with the responsibility. Miles Morales, just a kid from, gets his Spider-powers really close to the time when Spider-Man dies and he has to attempt to fill that void without any clue as to what he’s doing.

And then, just in time, a bunch of other Spider-People (and pigs/robot-spiders) show up! You would think that would mean he’d have a ton of mentors, but all it really means is that he’s even less qualified to be Spider-Man now. For a huge chunk of the movies, Miles struggles with his powers and just isn’t ready. It isn’t until he fully takes responsibility and takes a leap of faith that he truly becomes Spider-Man.

It’s not just Miles. Peter B. Parker has fallen on hard times, and through his adventures with Miles, he rediscovers his sense of responsibility as well. When we first meet him, he has no interest in helping anyone but himself, but by the end of the movie, he’s ready to not only sacrifice himself to save the Spider-Friends, but we see him reuniting with Mary Jane in his universe.

This movie isn’t about Peter Parker avenging his uncle, it’s not even really about Miles Morales. It’s about lifting the weight of adversity like a chunk of debris and becoming the best version of yourself. And that’s what superhero movies are supposed to be about.

Iron Man’s lost his suit. Batman was left broken in a prison. Spider-Man himself lost his web and Spidey-Sense. Thor had to adjust to life without Mjolnir twice. If someone has super powers, there will come a time where they have to prove they can be super without them, and by balancing power with responsibility, that kind of greatness has always been one of Spider-Man’s defining character traits.

The second thing that makes ITSV the best superhero movie is the insane production value. I’ll admit, I initially had some reservations about even seeing this movie because it was animated, but my brother basically forced me to come along, and I’m glad I did.

ITSV is an animated movie, but it’s unlike any other animated movie you’ve ever seen. Sure, it’s a cartoon, but it’s animated to look like a comic book. By removing the motion blur, the film has a kind of stop-motion frame feel where if you pause it at any given moment, it could just be a page from a comic book. It’s so bold and out there, and there’s almost always so much going on that you don’t catch everything the first time you watch it.

Sometimes the characters in shots are not only being animated at a different from rate from the background, but from other characters. There’s a rumor going around that Miles Morales has a slower framerate than Peter B. Parker because he’s that far behind in adapting to his Spider-Powers and sense of self. The different artistic styles of each Spider-Pal and even the villains is so jarring that you really feel like they’re from different universes because… well… they are.

This isn’t a cartoon adaptation of a comic book, this is just a moving comic book. They took a huge risk to create a movie like this, and it paid off big time. Instead of shooting in New York and using a bunch of flashy CGI, they created a world for their characters that feels alive.

The sound editing and score for this movie were flawless. The music, score, and sound effects might be the most important part of this film. Because as great as the characters, the acting, and the animation are, it’s the audio that gives this film that extra dimension that I think they knew they needed.

Firstly, they were so detail-oriented when recording even the smallest sound effects. They wanted to create something similar to the iconic “thwip” web-slinging sound, so they dedicated a serious amount of time to making sure a sound most of us didn’t even register was perfect. The howling noise we hear every time the Prowler appears is an elephant noise they distorted to create a sound that was frightening but had an essence of sadness as well.

Oh, and after they recorded all of the audio for the movie, they recorded it on vinyl and then re-scratched it into the mix. The attention to detail on something none of us even noticed during the first viewing of this film is insane.

Then there’s the soundtrack itself, which was also crucial to setting the tone of this movie. It not only fleshes out the character of Miles Morales, but gives you a much better perspective of Brooklyn in the film. At the very beginning of the movie when Miles is just sitting in his room, drawing and listening to Post Malone, that could be any kid out there and he becomes a real character instantly.

As is the case in every movie, the music frames the scenes. And whether Miles is walking down the street, sitting in class, having a heartfelt moment with his dad, or fighting against the villainous Kingpin, the music is always tonally dead on. And if you need proof… I present this scene.

Oh, and also, here are some things you might not have known about this amazing movie. Because movies, like cookies, are only as good as the smallest ingredient.

This was a movie that was made by people that love and understand not only Spider-Man, but comic books as a whole. This is a movie dripping with subtle, almost subliminal references that only the most die-hard fans would notice, but that don’t take away from the overall enjoyment of the film. This is a film that pleases the eyes, the ears, the mind, and the heart of people of any age.

This is a movie that you can watch with anyone, anytime, and you’ll laugh, cry, gasp, and maybe even learn something. No other superhero movie consistently hits from all sides like Spider-Man: Into the Spider-Verse did, and if you haven’t seen it yet, I beg you to change that.

2 thoughts on “Spider-Man: Into the Spider-Verse Is the Best Superhero Movie Ever Made”