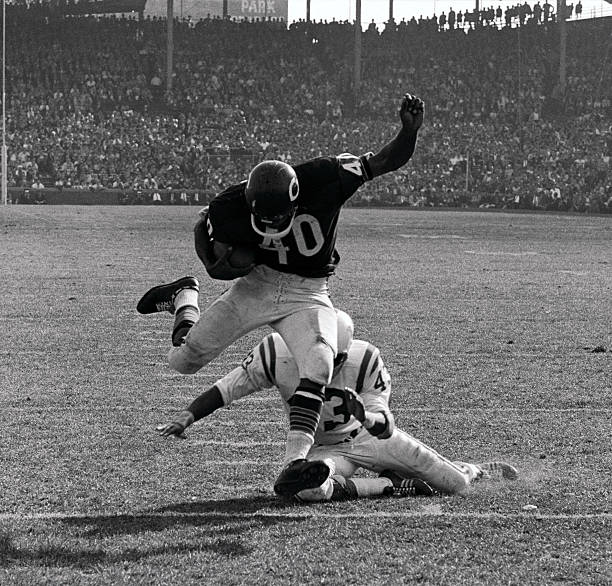 Andrew Luck retired this week and I still can’t get over it. Luck was supposed to be the next great quarterback, and due to terrible management and injuries, it never really happened. Now he’s retired and we just have to move on. It got me thinking about a few other great players that had to leave the game before we were ready to see them go. Here are the top ten NFL players that retired way too soon.

The Top Ten NFL Players That Retired Way Too Soon

Um… duh? The original cheat code video game superstar, arguably the best athlete to ever lace up a pair of cleats, and maybe the best that never was. Bo Jackson, a dual-sport athlete, never really got to shine the way he deserved to, and now all we have to remember him are a few precious highlights and of course, Tecmo Bowl.

The man who inexplicably keeps showing up in the “greatest quarterback of all time” debate retired at only 34 years old. He only played for ten years, but his team reached the Championship game in every single one of them. You can’t deny that kind of greatness, and you can’t help but wonder what could’ve been if he played a little longer.

All that silly stuff aside, Barber had a much better career than people give him credit for. Over the last five years of his career, Barber averaged over 2,000 all-purpose yards and nine touchdowns a season. He rarely fumbled or got hurt, and it’s not like his criticisms of Eli Manning were necessarily incorrect. But he walked away from the game at only 31 years old, leaving several productive years behind him.

Plus, I hear Kinky Boots is actually pretty good, if you’re into that kind of thing.

The career of Andrew Luck is a sad one. Great potential snuffed out by near negligent management, a poor supporting cast wasn’t enough to prevent Luck from making an undeniable impact during his six year career. Luck threw for 23,671 yards, 171 touchdowns, and only 83 picks in his career, which means he had more yards and touchdowns, while throwing fewer interceptions than the likes of Michael Vick and Roger Staubach.

(For more about Luck’s robbed legacy, read this article)

I almost left Gronk off this list because I’m just not convinced he’s actually retired. After playing such a crucial role in New England’s offense for the last eight years, the Patriots have neglected the tight end position all off-season long. I truly suspect he’s just resting his body and he’ll resurface with fresh legs in November.

But even if he doesn’t, he just might be the best tight end of all time. In just nine seasons, Gronk caught 79 touchdowns, which is tied for the third most ever by a tight end. The only two tight ends with more touchdown catches, Antonio Gates and Tony Gonzales, played at least sixteen years. If Gronk had played as long as either of them at even half his pace, he would’ve tied Gonzales.

Sadly, Davis is yet another great player who had to retire due to injuries. Davis really only played for four seasons before injuries limited him to only 17 appearances over the next three years, but over those three years, he averaged nearly 2,000 all-purpose yards and 16 touchdowns a season. That’s not a career high, that’s his average. If only Davis had been able to stay healthy, he could’ve destroyed the record books. Hold on tight, because you’re going to see more than a couple of tailbacks towards the top of this list.

Gale Sayers was one of the most electric players in the NFL in the days of the dinosaurs. In an era where monsters roamed the field and destroyed each other, the relatively diminutive Sayers ran wild. Explosive as a runner, a receiver, and a returner, Sayers had back to back seasons with over 2,200 all-purpose yards.

Sadly, his size was his undoing, and he couldn’t stay healthy. One of the most explosive players in NFL history was about 50 years early and would make Alvin Kamara and Christian McCaffrey look one-dimensional today.

In the first of two appearances by Detroit Lions with generational talent that decided to walk away from the game, we revisit the incredible, if short career of Calvin “Megatron” Johnson. Gifted with incredible size, speed, and skill, Megatron dominated the NFL. He averaged 87 catches for 1,377 yards and 10 touchdowns a season and came dangerously close to a 2,000 yard receiving season with a broken hand in 2012.

However, he walked away before the 2016 season, citing physical exhaustion and frustration with the team. Since then, he’s visited a couple of training camps and the comeback rumors have started up, but he’s insisted the Lions would never let him go. It’s a shame, because Johnson’s pure size and skill, plus obvious production, put him on pace to be arguably the best receiver the game has ever seen.

In my eyes, Barry Sanders is the best player in the long, prolific history of the National Football League. Undersized, at a position that relies heavily on the participation of other positions, Sanders dominated on some mediocre Detroit Lions teams. Barry holds the NFL record for most rushes of 20+ yards and most rushes for a loss, in a pretty dramatic fashion.

If you combined all of the yards lost on plays where Sanders was tackled behind the line of scrimmage, it sums up to 1,114 yards. Sanders averaged 1,527 rushing yards a season despite that, and it’s just so crazy to think what he could’ve done with any help on that side of the ball. It’s not hard to see why Sanders fell out of love with the game of football.