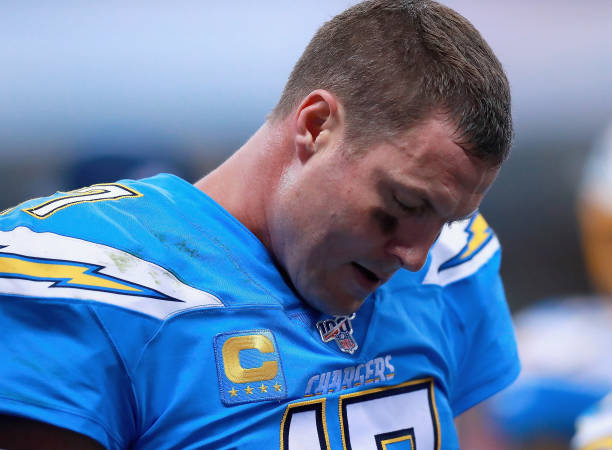 2020 is the off-season of strange free agent quarterbacks. Tom Brady, Drew Brees, Ryan Tannehill, Teddy Bridgewater, Philip Rivers, and Jameis Winston are all set to be free agents, despite all being considered valuable assets by their teams last season. Three of the men listed here are their franchise’s all-time leading passer, and they’ve won a combined seven Super Bowls as starters. It’s a passing league, and every team is looking to upgrade at quarterback (except maybe Kansas City), so these men will get hefty, hefty offers from a number of different teams, who will be happy to have them.

And maybe I’m crazy, but when I look at this murderer’s row of free agent quarterbacks, one of them just doesn’t have a lot to offer.

Nobody Should Want Philip Rivers

Let’s get the obvious out of the way. I’m a Raiders fan, and for a long, long time, Philip Rivers and the then-San Diego Chargers were a nightmare for my favorite team. Between 2003 and 2009, the Chargers won 13 straight games against the Oakland Raiders, and many of them weren’t even close. Recently, I even wrote an article where I called him the most overrated quarterback of all time.

So no, I don’t love Rivers or the Chargers. But you know what? I think LaDainian Tomlinson and Antonio Gates are two of the best ever at their position. I’ve always felt like Hunter Henry would be elite if he could just stay healthy, and I’m a big fan of Melvin Gordon. Joey Bosa is an elite edge rusher, and I’m incredibly envious of the safety tandem of Nasir Adderley and Derwin James, when healthy.

I have a begrudging respect for many players the Chargers have beaten my Raiders with over the years, and for a while, Rivers was among them. But here? Now? In 2020? He’s just not. In my eyes, he’s beyond washed up, and any team that invests heavily in him (*cough* the Tampa Bay Buccaneers) is foolish.

To quote fashion icon, Jacobim Mugatu, I feel like I’m taking crazy pills. I don’t understand how anyone could’ve watched Philip Rivers play in 2019 and want him to start under center. For the third time in his career, he threw 20 interceptions. He also put the ball on the ground eight times, losing three fumbles.

He also threw for fewer touchdowns (23) than he had in any season since 2007, when he was still just a cog in the L.T. machine. He didn’t rush for any scores, so that means he was responsible for just as many touchdowns as turnovers. His best games came against the Colts mere days removed from losing Andrew Luck, the porous Jacksonville Jaguars, and the hopeless Miami Dolphins before they turned things around.

The Philip Rivers that threw for 4,700 yards and 30 touchdowns is long, long gone, and he almost singlehandedly lost several games for the Chargers this year. This is why maybe, and I’m just spitballing here, but maybe, the Chargers had no problem letting him leave?

Don’t let Tom Brady fool you, quarterbacks do not age gracefully. Brett Favre aged badly, John Elway didn’t break 4,000 yards in any of his last four seasons, and Peyton Manning was a shell of himself during his final campaign. Maybe it’s their ability to make reads, maybe it’s just wear and tear on the arm, maybe it’s father time working his magic, but when quarterbacks decline, they do so by falling off a cliff.

Philip Rivers will turn 39 during the 2020 season, and in NFL history, only three men at that age or older have broken 4,000 yards. Warren Moon did it once, Favre did it once, and this guy named Tom Brady did it three times. Even in an era where passing is easier than ever, do you really think Rivers is on the same level as those men?

What exactly is Philip Rivers’ legacy? He beat up on a weak AFC West until Peyton Manning came along. Even after he retired, Andy Reid showed up and turned the Chiefs around. He put up good numbers, but against mostly bad teams. His Chargers teams, full of Hall of Fame and Pro Bowl talent, never even sniffed a win against Tom Brady’s Patriots, and despite a long tenure, the team’s trophy case remains empty.

Rivers is just the latest in a long-line of modern quarterbacks with bloated stats as a result of rule changes. He had bonafide first ballot hall of fame talent with LT and Gates, and all he ever did was manage games where Peyton Manning’s Colts performed their annual choking ritual. In his prime, he might’ve been a decent addition for a young team, but at this point? His best hope is to sign with Bruce Arians, where he was able to squeeze 5,000 yards out of Jameis Winston last year. Hey, speaking of which…

Didn’t Jameis Winston and Philip Rivers have the same season in 2019? Winston threw for 494 more yards, as well as seven more touchdowns. Sure, he threw 10 more interceptions, but once you break 20 picks, does it even matter? Neither guy seems to protect the football well, and if you’re comparing prospects, Winston blows Rivers out of the water.

More athletic, bigger arm, and hey, he’s significantly younger. I don’t think either guy is going to transform a team into a contender, but if you’re picking, like the Buccaneers appear to be doing, a cheaper asking price is all Rivers has over Winston.

2 thoughts on “Nobody Should Want Philip Rivers”