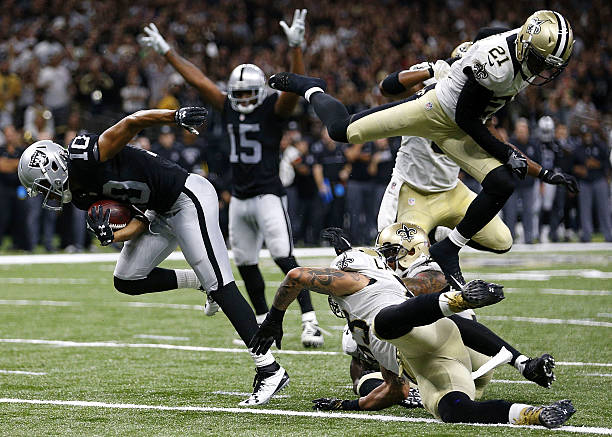 As of today, August 28th, 2020, there are 15 days until the Las Vegas Raiders take on the Carolina Panthers in week one. Here at BroSports, we’re going to release one Raiders game prediction a day until kickoff. We’re going to take a look at how we think the Raiders will match up with each opponent, what we think the score will be, and track those Raiders wins and losses throughout the season.

Today, we take a look at the first game ever played in Allegiant Stadium as the Raiders host the New Orleans Saints.

The Saints at a Glance

The New Orleans Saints are one of the best teams in professional football, and it’s a bummer that the Death Star will be empty, because the Raiders need all the help they can get. Future first-ballot Hall of Famer Drew Brees is still thriving under center, and he’s got plenty of help on offense. Reigning (undeserving) Offensive Player of the Year, Michael Thomas, leads off a supporting cast that includes Alvin Kamara, Emmanuel Sanders, and familiar faces, tight end Jared Cook and change-of-pace back, Latavius Murray.

The defense might be middle of the pack, but they still have some stars. Namely pass rusher Cameron Jordan and corner Marshon Lattimore, plus a familiar face at defensive coordinator, one Dennis Allen, who was a head coach somewhere once upon a time.

The Saints are bonafide Super Bowl contenders this year, and the Raiders should have their hands full.

In doing my research for these articles, I looked up the last showdown the Raiders had with their opponents, and it’s hard not to feel nostalgic for 2016. The Raiders opened the season against Drew Brees and the Saints, and were able to pull of a dazzling last-second victory in the Super Dome. I don’t know about you, but that win made me believe that the 2016 Oakland Raiders were different from all the other Raider teams I had suffered through.

A win here in week two would have the same effect for me. The Saints offense is nothing to be trifled with. This is a team that lost their starting quarterback for five games and still finished the season with the third most points in the entire league. They are talented, well-coached, and well-suited to play in a dome like the Death Star.

However, their defense isn’t as good. If the Raiders can finally fill their own shoes, and play to their potential, this game could turn into a shootout. A win here would dramatically change the perception of the rest of the season, giving the Raiders some real equity and firing up the bandwagon… just like it did four years ago.

The key to victory here on defense is generating pressure. The Raiders have invested a lot in that defensive line, and they’re going to have to get to Drew Brees, otherwise he’s going to shred the team’s talented by inexperienced secondary. Maurice Hurst is primed for a breakout year and Maliek Collins is the most underrated move of the off-season for the Silver and Black, but the real weight falls on the shoulders of Maxx Crosby and Clelin Ferrell.

Crosby has to prove that his rookie campaign wasn’t a fluke. He racked up sacks, but a lot of them came in one game, against the worst team in the NFL. He has to prove that he’s still hungry and build on a strong rookie campaign. As for Ferrell, he’s no strangers to doubters. His pick was highly criticized, and be it growing pains or bad schemes, he didn’t show a ton of promise as a rookie. These two are under a lot of pressure, and the team will need them the most against a strong offensive line in week two.

The other key to victory? The Raiders have to score. That sounds obvious, because that’s the point of offense, but the Saints are going to score at least 24-30 points in this game, easily. Even with the aforementioned pressure, the Saints are just too good to hold down, and the Raiders invested a lot in their offense this off-season.

Derek Carr has to come out and play ball with Drew Brees. Ideally, the Raiders follow their scheme and have long, methodical drives that kill the clock, but unlike last year, they can’t meltdown in the redzone. They can not settle for three while the Saints are scoring seven, because the game will get away from them.

Sadly, Raider Nation, I don’t think the Silver and Black takes this win. The Saints are just too good, too polished, and without the fans, there’s no tangible advantage for the Raiders. Everything the Raiders do, the Saints do better. It would take a shootout, and even then, you’re playing Derek Carr against one of the very best to ever do it.