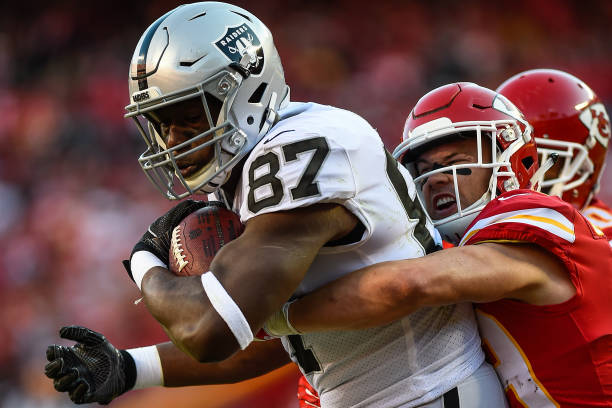 As of today, August 31st, 2020, there are 12 days until the Las Vegas Raiders take on the Carolina Panthers in week one. Here at BroSports, we’re going to release one Raiders game prediction a day until kickoff. We’re going to take a look at how we think the Raiders will match up with each opponent, what we think the score will be, and track those Raiders wins and losses throughout the season.

Today, the Raiders travel to the dreaded Arrowhead Stadium to take on the hated Kansas City Chiefs.

The Chiefs at a Glance

Does Raider Nation really need a reminder? Does anyone? Patrick Mahomes’ Kansas City Chiefs are the defending Super Bowl Champions. Mahomes is arguably the league’s best player, Travis Kelce is an elite tight end, and most of the receivers run sub 4.4 40 yard dashes.

The defense boasts Chris Jones, one of the most disruptive defensive linemen in football, and enough speed in the secondary to capitalize on bad mistakes. The Chiefs have won the AFC West for the last four seasons, and have beaten the Raiders in 12 of the last 14 meetings.

Patrick Mahomes is unlike anything the NFL has ever seen. The closest things are Dan Marino and Tom Brady, but Brady lacked Mahomes’ statistical brilliance and Marino never won a ring. Mahomes has been a starter for two years, and in those two years, he’s won a league MVP, a Super Bowl, and the closest his Chiefs have come to having a bad season is losing the AFC Championship in overtime against the best quarterback of all time on a penalty. As long as Mahomes and head coach Andy Reid are together, big red will be a threat in the AFC West.

The Raiders have a lot of young potential in the secondary. Johnathan Abram and Trayvon Mullen have flashed, and Damon Arnette is receiving rave reviews coming out of camp. The team could have a bright future in the secondary ahead of them.

However, there will always be growing pains. Unless the Raider pass rush becomes elite overnight, the young corners will struggle against KC’s preposterously fast receiving corps. It would take a perfect game from the Raider secondary to slow Kansas City down.

I wanted to pick the Raiders so badly. They’re finally traveling to Arrowhead while the weather is still nice, there won’t be as many fans, and the offense finally has some speed!

But this team just won the Super Bowl, and they didn’t really lose anything. I don’t think the Raiders are going to take this one, and if we’re being honest, I don’t think it’ll be close either. Here’s hoping I’m wrong.