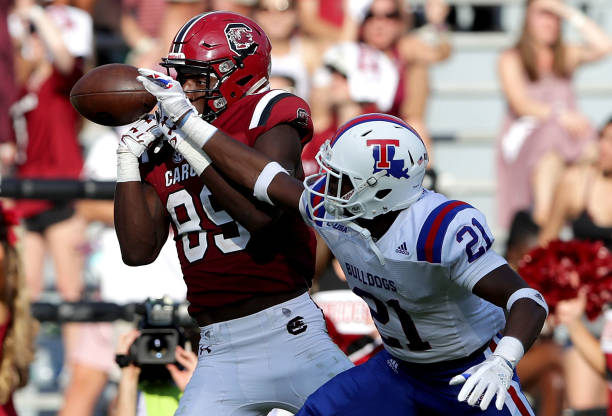 I was perusing old articles and I stumbled upon my realistic expectations for the final draft class in Oakland Raider history. I was pleasantly surprised by just how right I was, getting pretty close statistically on quite a few of the Raider rooks. I’m going to hope that momentum carries over and do the same for the first ever class of Las Vegas Raider rookies.

Mike Mayock and Jon Gruden had their choice of any wide receiver in this draft, and they chose Alabama’s Henry Ruggs with the 12th pick. Ruggs’ possesses other-worldly speed, and is the definition of a home run hitter. Reportedly, the Raiders are hoping he can step into the role that Jon Gruden and company designed for a certain All-Pro jackass wideout last season.

A year ago, the reports out of camp were that every play was designed to give Burntfeet McWronghelmet a chance to score, and with Ruggs’ speed, it’s not hard to imagine the same will be true for him. I like to imagine plenty of post routes and creeping underneath routes to maximize YAC.

However, I don’t anticipate him being top three on the team in catches. I think Hunter Renfrow gets the lion’s share, Waller is one of Carr’s favorite targets, and another rookie on this list will make a big impact too. Ruggs is just as lethal with the ball as he is without it, as defenses will have to respect his speed any time he steps on the field.

I’m gonna put him down for about 50 catches, which he takes for 650 yards and five touchdowns. I know that sounds conservative, but I really believe Ruggs’ best gift to the Raiders is the way his coverage will open up everybody else.

Unlike his teammate, Trayvon Mullen, it looks like Damon Arnette will start for the Raiders pretty early in his rookie campaign, possibly even game-one. Cornerback is one of the toughest positions to adjust to, as the level of competition and preparation simply skyrockets. As a result, it’s really hard to pin down just how well he’s going to do.

Assuming that Mullen has developed the way everyone expects him to, and the pass rush takes a step forward, I anticipate Arnette being the one that faces off against the team’s second best receiver pretty consistently. I’m going to go out on a limb and say that he has more picks than Mullen did last season, but more tackles than Trayvon has this season.

Whoops, the Raiders Hate Me

Lynn Bowden Jr. is my favorite rookie from this class. He’s an Alpha male with great speed and impossible versatility. Kentucky said he was a quarterback, Maddden says he’s a running back, the depth chart says he’s a wide receiver, this guy does a little bit of everything… except pass block.

Unfortunately, it doesn’t seem like he’s ready to be a 10 touches a game kind of player, because he’s so raw, and so versatile, that he doesn’t have a nailed-down, prominent role yet. He can’t really be the slot guy because Hunter Renfrow is there, and Jalen Richard is an established receiver out of the backfield, plus, Josh Jacobs wants to be more of a receiving threat this season.

That’s not to say he won’t produce as a rookie. I expect Gruden to push him out on the field in quite a few different ways, but until we see it on film, it’s hard to figure out what numbers he’d even put up. I’m gonna be optimistic and say that he becomes a fairly productive returner and then adds about 500 yards and three scores as an offensive weapon.

With Tyrell Williams’ season ending before it begins, Bryan Edwards’ stock has gone through the roof. Even before Williams got hurt, Edwards was getting some work with the first string and getting some lofty praise from his starting quarterback. As a big, physical X, Edwards plays a unique role in the Raider offense.

Edwards is substantially bigger than the other projected starters at receiver, and he brings something to the table that none of them, regardless of their other physical gifts, do. Edwards chews up 50/50 balls. If you go back and look at Derek’s film over the years, he’s loved big, physical receivers that go up and get the ball.

I bet that Edwards ends up with more catches than Henry Ruggs, and maybe even more touchdowns. Put him down for 65 grabs, 800 yards, and eight touchdowns, ultimately ending the season as Carr’s go-to guy in the clutch.

Tanner Muse is a great project. He’s got exceptional size and speed, and his versatility makes him a valuable prospect in the Raider’s system. However, he’s not enough of a safety to push for playing time there, and he’s hardly polished enough to make an impact as a linebacker as a rookie. I think Muse spends most of his rookie campaign flashing his athleticism on special teams, only seeing live time as a fill-in.

You hate to say that you hope you don’t see a Raider rookie in action, but… I really hope we don’t see much of John Simpson this year. Not because he’s a bad player, far from it, he’s a freak athlete with a competitive spirit that looks to be a force for the Raiders down the road.

However, here in 2020, if he sees the field, it’s because something bad happened to Gabe Jackson or Richie Incognito, as well as respected back-up, Denzelle Good. So I’m going to hope that he doesn’t see the field a whole lot as a rookie.

Amik Robertson is one of the most intriguing Raiders to watch this season. Standing at only 5’8, he lacks the prototypical size for an outside corner, making him the ideal guy to start in the slot. However, Lamarcus Joyner and Nevin Lawson already have their paws all over that spot, and don’t look to be giving it up in 2020.

It’ll be interesting to see if Robertson can push for snaps this season. He’s a great corner, and would’ve been a much, much higher pick if… well… he was a little higher off the ground. He’s the nickle corner of the future, and I bet he does see some action as a rookie, even if he’s not starting just yet. Joyner’s cap-hit makes him a likely release next season, when hopefully Robertson will be ready to take over inside.