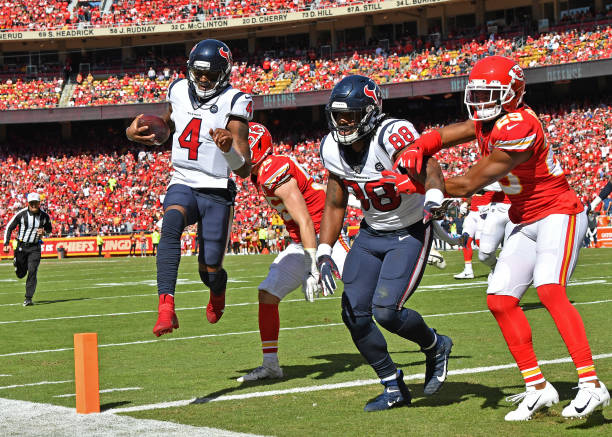 I love doing weekly picks. I have done them every year that I’ve been writing about sports, which is long enough that I don’t want to say, because I don’t want to show my age. Of all the weeks, the worst week to pick is the first one.

Even during seasons when we had a pre-season, the results rarely indicated which teams would or would not succeed, so I went in blind and did my very best. In 2020, a year of COVID-19, natural disasters, a presidential election, and social tension? I’m just happy we’re going to have something to watch week one.

Anyway, here are my blind shots in the dark.

The 500 Million Dollar Man, Patrick Mahomes, and his Kansas City Chiefs are kicking off the NFL season against Deshaun Watson and the Houston Texans on Thursday Night Football, and as much as I’d love for the Texans to get the upset, I still think the Chiefs roll. Imagine, you’re a corner, you have had zero live reps since last season, and you have to try and contain a corps full of 4.3 40’s and a guy that can sling it with his off-hand, on the run, falling down. Forget about it. Chiefs win and it isn’t close.

Teams always insist they aren’t distracted by things going on off-the-field, but they’re all liars. This off-season alone, the Washington Football Team has had a name change, their owner has been accused of sexual misconduct, and now poor Ron Rivera, their head coach, has cancer. In a time of Coronavirus, Washington has proved Murphy’s law to be true.

Carson Wentz is, somewhat predictably, a little banged up, but the Eagles will be keeping him in bubble-wrap until the season starts, so he should be good to go, bringing home a 1-0 start in a confusing NFC East.

I know, this is wild, and I had gotten halfway through my justification of why I picked the Patriots when I changed my mind. The last game the Miami Dolphins played was a win over these Patriots with Tom Brady and all of the guys that opted out due to injury. The Dolphins got better this off-season, the Patriots didn’t, and regardless of who is starting under center for Belichick, they have no live reps in the offense. I think the Dolphins get a surprise win in week one.

This is a bit of a surprise pick, but I think the Vikings might be sneaky-good this year. The addition of Yannick Ngakoue opposite of Danielle Hunter gives the Vikings some speed in their pass rush, and I still don’t understand how they didn’t do more with their offense last season. Meanwhile, Aaron Rodgers asked for weapons and got a replacement instead.

They say everything’s fine, they say there’s no tension between the office and Rodgers, but you can’t tell me that the Pack actually got better this off-season. Removed from the comfy confines of Lambeau, I think the Vikes get a big win to start the season.

Jaguars fans, I feel your pain. Raider Nation has been where you are right now, and I know it looks bleak, but just know this. In the not-so-distant future, you’re going to have Trevor Lawrence and a ton of cap space to lure free agents to no-income tax heaven, Northern Florida.

However, here in 2020, I’ve made a solemn vow… I will not pick your team to win a single game until they do. So if they go 0-15 and the last team decides to stay home and not play, I’ll still pick them to win, I’m very sorry.

I think the Detroit Lions are a sneaky team this year. If Matthew Stafford can stay healthy, they have an offense that can compete, and Matt Patricia is supposed to be some kind of offensive genius, right? Meanwhile, 2018 grows farther and farther away for Matt Nagy’s hype-train. I think the Lions get a sneaky win to start the season.

I’ve already written about this here, there, and everywhere, but I’m picking the Raiders because I think they’re a more prepared team, and they match up well against the Panthers. The Raiders have consistency on their side, and I think Derek Carr and company start the year with a dub.

THE LAS VEGAS RAIDERS REMAIN UNDEFEATED AS A FRANCHISE.

I’m not sold on the New York Jets at all. This off-season has been a disaster for them, and losing their best player, Jamal Adams, is the least of their problems. Their starting offense has looked bad against their own practice squad. The Bills have a very good defense… I think they pull this one out.

I’m sorry Dawg Pound, I’m more optimistic about you guys this year, but not at M&T Bank Stadium against one of the AFC’s best units. Reigning MVP Lamar Jackson is looking to follow-up on last year’s success, and they’ve committed to bulking up the defensive line.

The Seattle Seahawks probably should’ve won the NFC last year, but injuries completely derailed their season. It was on the arm of Russell “Mr. Unlimited” Wilson that they were able to will themselves as far as they did. Now, finally healthy, I think they run it back. I’m particularly excited to see how DK Metcalf develops in year two.

Meanwhile, the Atlanta Falcons desperately need to change things up. They’ve been stagnant ever since their devastating Super Bowl loss, and if things don’t change soon, Dan Quinn might need to start looking for new employment.

I guess? I’m not really sold on the Chargers, especially without the services of Derwin James in the secondary. But the Bengals were the worst team in the NFL last season. Even if it turns out that Joe Burrow makes the transition to the pros effortlessly, you can only set your expectations so high.

I like the Arizona Cardinals. I think they’re set for a breakout season, maybe even breaking into the wildcard round. However… we are talking about the reigning NFC Champion San Francisco 49ers. Everyone’s healthy, they’re fired up after their loss, and I think they’re ready to try and run it back.

So… the NFL has Tom Brady vs. Drew Brees in the first NFC South matchup, and we got Ben Roethlisberger vs. Daniel Jones in primetime instead? Neat. Anyway, this is the best match-up of the week, bar none.

Two NFC contenders facing off in the first week of the season, setting the tone for the bizarre, bizarre 2020 campaign. I’m taking New Orleans because I think they’re more cohesive. Tom Brady hasn’t played a single snap in this new offense with all these new weapons, but Drew Brees and Sean Payton are attached at the hip. Plus, I think they might be better on the defensive side of the ball.

How can the Dallas Cowboys have their annual meltdown if they don’t start off hot?? On paper, this is a dangerous, dangerous Dallas team, with a new head coach, and the Rams? Man, it just doesn’t feel like the Rams ever really recovered from losing that Super Bowl. Jared Goff was exposed, they never replaced Todd Gurley, and as fantastic as Aaron Donald and Jalen Ramsey are, they can only do so much.

I think Dallas gets off to a hot start.

This is a huge season for so many Steelers. Big Ben needs to prove he can bounce back from a year off, Juju Smith-Schuster has to emerge from Antonio Brown’s shadow, James Conner needs to stay healthy, and Mike Tomlin needs to get over the hump. They have so much to prove, and so little time.

Meanwhile, these are the first live reps that Joe Judge’s New York Giants will have. No preseason, no real competition, and I’m not in love with their roster anyway. Steelers roll.

I’m not the biggest fan of Drew Lock. I wasn’t coming out of college, and he didn’t really wow me last season. The Broncos have reloaded on offense, and look primed to take a big step forward in 2020, but I think that step will have to wait. My biggest issue with the Tennessee Titans this season is that so much hinges on the health and effectiveness of Derrick Henry.

Fresh legs on Derrick Henry and A.J. Brown are a bad time for any defense, and the defense in question is an iffy Broncos team hoping Vic Fangio can finally deliver on the promises he made last off-season.