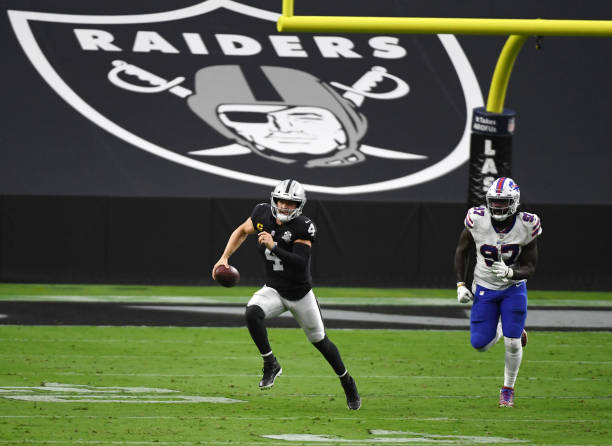 Depending on who you ask, Derek Carr is either a surgeon, combating injuries across the offense to put up efficient, productive numbers, or he’s a conservative check-down artist holding the Raiders back from reaching their true potential.

As of this writing, Carr, like the Raiders, is a victim of balance. His team is sitting at .500 with a 2-2 record, and while Carr is on pace for well over 4,000 yards, 30 touchdowns, and no interceptions, he’s also on pace to lose 16 fumbles. Regardless of the argument you want to make about the seventh-year quarterback, you’ll find enough evidence to support your argument.

While I do often find myself feeling envious of quarterbacks like Russell Wilson, Tom Brady, Dak Prescott, or Josh Allen, who have lit up the stat-sheet every other week, I can accept that it could be a lot worse than Derek Carr.

And frankly, even if Carr isn’t your cup of tea, he’s not the biggest reason why the Raiders have dropped two games in a row heading into a match-up with the Kansas City Chiefs.

Derek Carr Isn’t Perfect, but He’s Not the Problem Either

“It takes all of us” is the NFL’s slogan for 2020, and it’s apt, because it also applies to the game itself. Everyone from the person calling the plays to the waterboy hydrating the athletes plays a part in a team’s victory or failure, and the Raiders have not been bringing their A game from top to bottom.

Without making this a Carr apology article, of which I’m sure there are already enough, let’s look at the facts. Derek Carr is missing Tyrell Williams, Henry Ruggs III, Bryan Edwards, Richie Incognito, and Trent Brown on offense. Even the players that aren’t healthy aren’t necessarily being their best selves, with Gabe Jackson having a brutal showing versus the Bills, and five different Raiders (Derek Carr, Josh Jacobs, Darren Waller, Hunter Renfrow, and Devontae Booker) fumbling at least once, losing six through four games.

It’s hard to look at close losses and wonder what could’ve been with a healthy Raiders squad on the field. It’s a small sample size, but the Raiders have yet to lose a game where Henry Ruggs plays, for what it’s worth. Derek Carr has done some silly stuff, that play where he clearly fumbled against the Bills but they called the play dead? Absolutely ridiculous. But it’s not like the team has given him any help to start the season.

But enough about the freaking quarterback. If you want a Carr debate, go to Twitter, I don’t care when you’re reading this, someone’s arguing about him.

The Las Vegas Raiders defense remains absolutely putrid. It’s embarrassing how consistently bad the Raiders defense has been. Four games is too small of a sample to determine a real pace, but just for fun? The first four opponents averaged 138 rushing yards and two scores a game. That means the Raiders are on pace to give up over 2,200 yards and 32 touchdowns on the ground this year.

In the illustrious history of the franchise, the Raiders have never given up 32 rushing touchdowns in a season. LaDainian Tomlinson had 1,815 yards and 28 touchdowns on the ground in 2006 and he won League MVP. Those rushing numbers were enough to earn the then-San Diego Chargers the best record in the league. The Raiders are on pace to give up more than that this year.

Their pass defense isn’t anything to write home about either. They’re middle of the pack, giving up about 250 yards a game. They haven’t given up many touchdowns through the air, only five through four games, but they’ve also only snagged two interceptions as a team.

That’s the real issue with the Raiders, they’re a very submissive defense. Outside of Jonathan Abram, nobody’s really playing with any aggression. They haven’t forced a fumble, opposing drives are about 40 yards on average, and they only have four sacks, three of which belong to Maxx Crosby.

When an opposing offense really gets going, it doesn’t matter what the Raiders defense does. You can’t expect them to consistently beat playoff teams if they’re rolling over on defense.

I believe the offense has underperformed, partially because of injuries, partially because they’ve lacked aggression, especially Jon Gruden’s playcalling, but they’re doing enough to be competitive with a mediocre defense. The Raiders offense isn’t even competing with the opposing group, it’s their own defense they have to try and keep pace with.