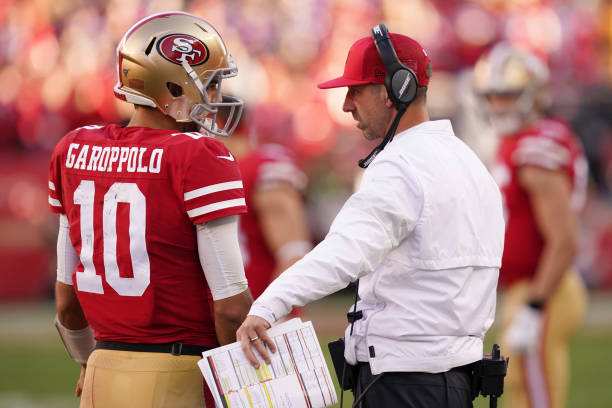 Kyle Shanahan and the San Francisco 49ers have remained adamant all off-season that Jimmy Garoppolo is their guy for the 2021 season. On no fewer than five occasions, the head coach has insisted the 29 year old quarterback gives them the absolute best chance to win football games, and that they aren’t interested in starting anyone else. I am not an inside, have never claimed to be, and have zero sources… but I’m almost certain that he’s lying through his teeth. Here’s why.

Firstly, the San Francisco 49ers just traded three first round picks, as well as a third, to move up to number three. You do not give up a king’s ransom like that for anything but a quarterback or a pass rusher, and there isn’t a pass rusher worth a top 15 pick in this draft class. The 49ers have basically already admitted that they’re taking a quarterback, depending on who the New York Jets take after the Jaguars select Trevor Lawrence.

Secondly, I might believe the 49ers weren’t moving on from Garoppolo if they took a quarterback, maybe Mac Jones or Kyle Trask, with their original pick, the 12th in the first round. It wouldn’t hurt either of those guys to sit behind a veteran for a season. But John Lynch and Shanahan traded multiple firsts to be in this position. They have essentially mortgaged their draft future on this pick. You don’t give up three picks for a flashy backup. With that kind of investment, you have to believe the 49ers will want him on the field as soon as possible.

This is very obviously a win-now move, and if what Shanahan says is true, that Garoppolo gives them the best chance to win, why trade up at all? Many out there, myself included, believe Garoppolo is holding the team back offensively, and that trade certainly makes me think the 49er brass agrees.

San Francisco’s offensive scheme is magic. Kyle Shanahan’s iconic coach-dad, Mike, was known for being able to generate a great rushing attack with just about anyone, and his son does the same for the passing game. Few teams generate more yards after the catch, and the group of speedsters that Shanahan has collected fit perfectly. As a result, it’s not the league’s most complicated offense. It doesn’t really take two years of studying to figure out like Derek Carr apologists insist Jon Gruden’s offense does.

This can be proven by the success that CJ Beathard and Nick Mullens have had when they’ve stepped in for Garoppolo. Hilariously, Mullens almost as many 300 yard games (four) as Garoppolo does (five). Neither quarterback would be in high demand on another squad, but both have played… about as well as Jimmy when they’ve had to. I have a hard time believing that Trey Lance or Justin Fields aren’t as good, if not better than those two.

The Truth of the Lie

The reality of the situation is this, Jimmy Garoppolo isn’t a great quarterback. I struggle to say he’s a good quarterback. He’s achieved a moderate amount of success in a good scheme, and had moments of brilliance. But obviously he has plateaued and the 49ers want to go in a different direction. But in a league where quarterback is king, it would be foolish to simply release him. However, it wouldn’t make a ton of sense to keep that contract on the books for a backup. So the only intelligent thing to do is trade him for the most value possible.

If the 49ers were honest, they would do what my Raiders did with their star players, say “we’re going to trade this guy, and if nobody wants him, we’re cutting him.” That’s a true story, the Raiders did that with Trent Brown, Gabe Jackson, and Rodney Hudson this off-season. As a result, they barely got anything for three Pro Bowl caliber players. Because if a team knows that you want to get rid of a player, you lose a lot of leverage. But if they think a player is tentatively available, you can ask for more.

The 49ers can not come out and say that they want to move on from Jimmy Garoppolo if they hope to get a substantial return in a trade. They need to pretend that they are starting him next season, creating a situation where a team might be tricked into thinking they’re stealing Garoppolo away. Are teams actually going to be tricked? Obviously not, as I’m not even on the team and I think it’s pretty transparently obvious what they’re doing. But for the sake of negotiations, they have to put on the performance.

Don’t believe me? Think I’m making this up. Let me hop across the NFC West and see what Kliff Kingsbury thinks about Josh Rosen.