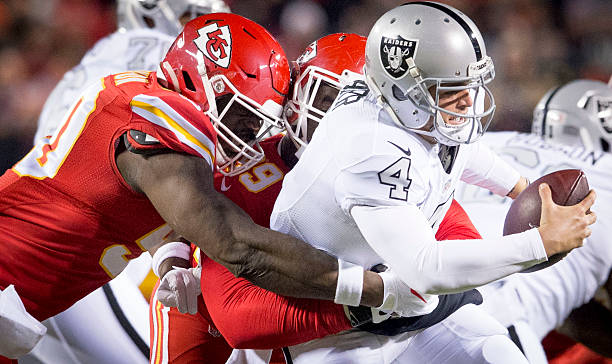 Derek Carr is the Metallica of quarterbacks. He’s nowhere near as good or as bad as anyone will tell you he is. He’s the franchise’s all-time leader in passing yards, and he’s creeping up on the record for touchdowns. However, for many, many reasons, wins have evaded him. He’s dealt with injuries, inconsistent receivers, a litany of scheme changes, and most unfortunately, abysmal defense.

But that’s not what comes up when you talk to Raider Nation about their quarterback. The most frustrating thing about Carr to Raider’s fans is his inability to beat Kansas City. He’s performed admirably under crazy circumstances against literally every other team, but for some reason, he can’t seem to get past the Chiefs. At least… not in Kansas City.

It’s easy to forget sometimes, but Derek Carr has actually beaten Kansas City. In fact, he’s done it twice. The 2014 season feels like a lifetime ago, but it was actually in primetime against these Kansas City Chiefs where Derek Carr got his first NFL win. Then, three years later, Carr beat Alex Smith in a shootout, again in primetime, during the tumultuous 2017 season. Derek Carr’s games against Kansas City in Oakland haven’t been bad. In 2017 and 2018, he threw three touchdowns with zero interceptions in games that were closer than they appeared.

Derek Carr’s performances against Kansas City in Oakland aren’t out of the ordinary. Carr didn’t give up four bombs to Patrick Mahomes in week two this season. He didn’t give up 40 points to KC last ear. The Raiders haven’t held Kansas City under 20 points since the Silver and Black swept their rivals in 2012, two years before Carr was drafted. However… In Kansas City? It’s a different story.

As of this writing (November 12th, 2019), Derek Carr has never won a game in Kansas City. He’s attempted 204 passes, completing 113 of them, for 928 yards, three touchdowns, and five interceptions. Spread over five games, that averages out to a 23/41, 168 yard, one touchdown, one interception game. He’s also fumbled five times, losing two of them.

Compared to the 25/40, 264 yard, two touchdown, one interception average he carries against Kansas City at home, this is troubling. And it’s obviously hurt the entire offense. At home, the Raiders have averaged a 30-21 loss to Kansas City. Not great, but still respectable. In KC? The average is a little steeper, a 27-12 loss.

Make no mistake, it’s hard to being the visiting team’s starting quarterback in Arrowhead. It’s one of the loudest stadiums in American football, and the later into the year it gets, the colder the weather is. You’re playing against a well-coached team, with no shortage on talent, in front of thousands of screaming fans, typically the cold. Which got me thinking. How different is Derek Carr on the road vs. at home?

At home, Carr’s numbers are little better than on the road. Firstly, his record is significantly better. Derek has won 23 of his 44 home games, giving him a winning record when the Raiders are the “home” team. An average home game sees Carr complete 23 of 36 passes for 250 yards, two touchdowns, and an interception.

On the road, it’s a different story. He’s only won 14 of 43 away games, and while he still completes about the same number of attempts, it’s for nearly 20 fewer yards, and only one touchdown. I think the biggest difference is that he’s sacked far more on the road. While he’s only been sacked 66 times in 44 home games, he’s been sacked 88 times in 43 road trips. That’s a pretty serious difference, especially for a quarterback who is visibly better when protected well.

As it turns out, Derek Carr isn’t exactly the same quarterback on the road. It’s a slight difference, and not necessarily a harsh criticism. Peyton Manning, Aaron Rodgers, and Russell Wilson also put up better numbers at home than they do on the road. For a variety of reasons, it’s not a big deal. And for what it’s worth, he’s nowhere near as bad on the road anywhere else in the division. It’s just Arrowhead.

I tried desperately to find something scientific about Kansas City’s homefield that made it special. The weather isn’t great, but in Carr’s five trips to the stadium, the weather has varied. He played one game where it was an unseasonably warm 58 degrees, and another where it sank below 20, but his performance didn’t differ. In all reality, they actually played better in the colder game.

I also checked the starting time, but they’ve played in all three time-slots on any given Sunday, and none of them made a difference. The result was the same. To date, Derek Carr has not played well in Arrowhead. He’s never broken 250 yards, he’s never thrown multiple touchdowns, and he’s been held under 200 yards on three of five attempts. He has more turnovers than touchdowns in that stadium, and that’s a recipe for disaster.

Ultimately, I really think it comes down to Kansas City being a really good, really well coached team, at home, typically later in the season, and the Raiders being unprepared. Denver and Los Angeles haven’t been anywhere near as good or consistent as Kansas City has been since 2014, and it’s not like the Raiders have always been a playoff contender. If the Raiders were constantly travelling to New England or Houston, I bet there would be a similar stigma about their stadiums.

Yet again in 2019, Kansas City can’t stop the run. They’re giving up nearly 150 yards on the ground per game, and Josh Jacobs is the clear favorite to win the NFL’s Rookie of the Year award. I’m not saying take the game out of Derek Carr’s hands, I’m just saying make it easier on him. Don’t try to out-duel Patrick Mahomes and company, just keep the Raider defense off the field and punish Kansas City’s defense physically.

Derek Carr can win in Kansas City, it just hasn’t happened yet. This year might be the year, though the Raiders have to make sure they don’t overlook the Cincinnati Bengals and New York Jets, who are bad, but as they say… any given Sunday.

One thought on “Derek Carr vs. Arrowhead Stadium”