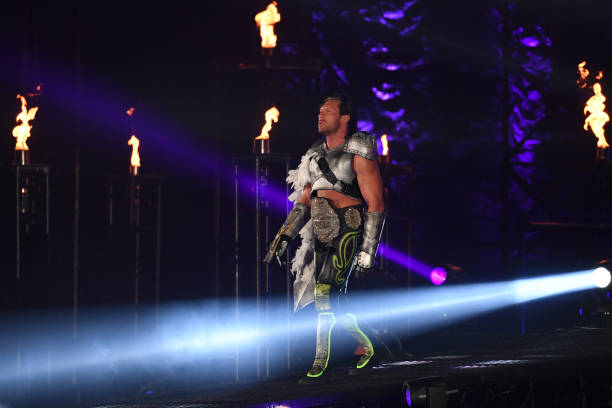 Late yesterday it was reported that Jon Moxley has MRSA, and sadly wouldn’t be able to work against Kenny Omega at their ALL OUT pay per view. Then today, Moxley confirmed it himself on twitter, and now AEW is missing one of the biggest draws in their young company.

So I’m just a mark with a website, but here’s what I think AEW should do to, if nothing else, lessen the massive loss of Jon Moxley’s absence from ALL OUT in Chicago next Saturday.

How AEW Should Fix the Jon Moxley Problem

AEW has a big problem. A week away from their biggest show to date, they’re missing half of arguably their biggest match. Jon Moxley debuting and attacking Kenny Omega at Double or Nothing was the exclamation point to a very good debut show, and it’s all been building to a match that has to be postponed. With very little time to correct this, they’ll have to work on the fly. Oddly, this isn’t the first time AEW’s had to call an audible like this, after all, the first AEW Championship match was supposed to be between Adam “Hangman” Page and PAC back at Double or Nothing.

In that situation, they simply gave their battle royal some meaning and gave us a number one contender’s match between Chris Jericho and Kenny Omega. Outside of personal pride, nothing was really on the line in this match, so AEW won’t have to work as hard to rectify it.

Here’s what I’m thinking AEW should do. Firstly, bump Cody vs. Shawn Spears up the card. That match has a much bigger build working for it right now, and unless AEW can get PAC (which I wouldn’t rule out), Omega’s opponent won’t have the same drawing power that Moxley would’ve.

Secondly, I’d have the mystery of Cody’s second play out through the evening. During the Buy In, announce that it’s not Pharaoh, Tommy Dreamer, or DDP. Then, at the beginning of the show, have an excited MJF come up to Cody, thinking it’s him, only to be rejected by his mentor. Before the actual match, have it be revealed that it’s not his brother Dustin or his wife, Brandi either.

They’ve kept it a secret so far, and it just feels like it would be underwhelming if it was someone from his entourage that we’ve already seen. I don’t know who you could get that would provide a big enough that’s relevant to Tully short of Tessa (who I assume is unavailable with IMPACT), Ric Flair (who is far, far down the WWE rabbit hole), or Flip Gordon (who I assume is still signed to Ring of Honor). But that’s not really my business.

The Elephant in the Room

With all the drama of Cody’s second taking up backstage segments and screen-time, Omega’s missing opponent becomes the elephant in the room. Then, before Cody’s match, Kenny comes out to the ring by himself. He says that he’s embarrassed, both as a performer and an executive that he couldn’t deliver the match he advertised, even if it wasn’t his fault.

He could even take a dig at Moxley here with some thinly veiled promo about competing in a certain tournament and how not everyone can handle it. It’s a little off-brand, but it keeps that rivalry going. Anyway, Omega then says that unlike Moxley, when he says he’s going to compete somewhere, he does. Since he’s the best wrestler in a major wrestling promotion, he figures now is as good as time as any for his first open challenge.

It’s at this point that I’ll remind everyone that ALL OUT is being held in Chicago. And that a certain straight-edge wrestling icon will be at STARRCAST the night before. Everyone has speculated about whether or not CM Punk would show up at the event, whether they’ll admit it or not, so that’s exactly where the crowd thinks things are going.

And then… MJF comes out instead.

Go With the Flow

Look, even if it’s PAC vs. Omega, which is a dream match of mine, people are going to be disappointed. Everyone was excited for Moxley vs. Omega, and the fact that they’re not getting it will disappoint unless they do pull of a miraculous CM Punk appearance. But instead of pretending Punk’s return will happen, let’s go with getting the company’s youngest heel some major heat.

MJF isn’t scheduled to wrestle at ALL OUT, and coming to the ring to face Omega when everyone is expecting CM Punk will get him booed out of the building in an arena with many heel-friendly fans. Have MJF come out with a microphone and run down the crowds for getting excited about someone that wasn’t there when “someone even better already was” will have the audience breathing fire.

Then you can have a Kenny vs. MJF match if you want or you can just have them scuffle around, it won’t hurt anyone either way. But if you know the fans are going to be let down, you might as well go with the flow and turn your bad fortune into some heat for one of your best young performers.

But that’s just me. What do you guys think?