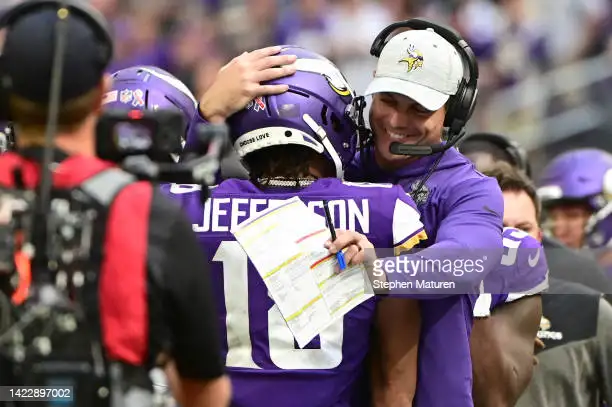 Jefferson Is The New Adams

Boy, oh boy, did the Green Bay Packers look like they missed Davante Adams out there. From their first offensive play, you could tell that something was wrong. Christian Watson blows the top off the defense, has his man beat by a country mile, and man, he just dropped it. It was that simple. Davante Adams is taking that for a touchdown, no question about it. Aaron Rodgers, for the first time in years, looked genuinely shaken out there. He was missing his security blanket, and it showed.

Of course, what kind of writer would I be if I didn’t draw some cinematic parallels here? Where Rodgers was missing his security blanket, Vikings quarterback Kirk Cousins found himself nice and cozy in the warm embrace of Justin Jefferson. The third-year receiver out of LSU led the Vikings to the promised land of the end zone twice, and racked up 184 yards, en route to taking down the divisional rival Packers. Justin Jefferson is awesome, and there’s no doubt now about who the best receiver in the NFC North is.

The Bills Are The Best Team In Football

The Bills, in the words of my colleague Ryan Seiple, looked like the team to beat on Thursday Night Football. Buffalo systematically picked apart the reigning champions, in their house, on their ring night, without even playing a perfect game. They made mistakes! And they still won by three scores! The Bills have so much room for improvement, and they looked like they would have destroyed all 31 other teams last night.

My only worry for the Bills is that they’ll actually fix this too quickly. There is such a thing as peaking too early, at least in my opinion. I would hate to see Buffalo waste what could surely be a Super Bowl run on meaningless games in November, or something like that. Josh Allen has elevated himself to another level in terms of his awareness in the short and intermediate game. If he cleans up the interceptions he threw on Thursday night, Buffalo could be in for a championship-winning season.