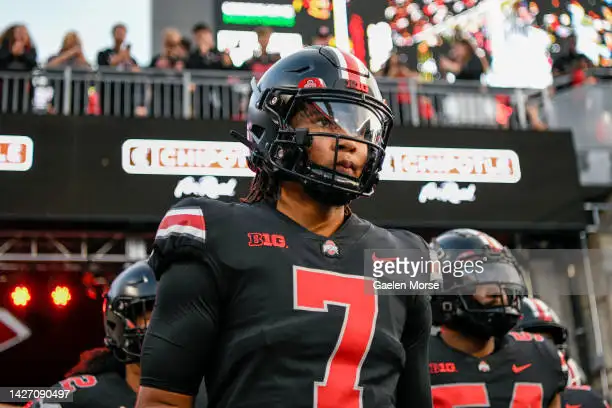 What I’ve seen from C.J. Stroud this year has been exceptional. From last year’s season opener against Minnesota, to this past week’s dominating victory over the Wisconsin Badgers, I’ve seen more growth from Stroud than almost any other quarterback I’ve scouted over the past six years. Stroud and the Buckeyes, since that first-week scare against Notre Dame, have looked like perhaps the best offense in the country. Stroud is at the helm of that, and the quickness with which he learns really allows Ohio State to do whatever they want.

Stroud has allowed Ryan Day to open up Ohio State’s already-deep playbook even further, and to keep defenses guessing. What puts him at No. 1 on this list for me, however, is his ability to showcase and correctly use his physical attributes. Stroud isn’t extremely fast, but he’s shown that he can stand tall in the pocket and deliver laser after laser with surprising grace and efficiency.

The single interception against Wisconsin of all teams scares me a little bit, but the five touchdowns help cover that up quite nicely.

This week, Will Anderson is the only defender on this list. Spoiler alert, but I didn’t think Georgia’s Jalen Carter earned it all that much this week. Following what I believed to be a slow start for Anderson, he’s really turned it on in the past two weeks. While he may not have been all over the stat sheet like he was last Saturday against UL-Monroe, but he had a high sack volume and was physically controlling the game basically the entire time.

Anderson collected five tackles and 2.5 sacks against Vanderbilt as the Crimson Tide once again cruised to a lopsided victory. Aside from being a bit light, Anderson has everything a scout could look for in a top pick at defensive end. What I was really impressed with is that he gets it at such a young age, and he understands how to impact the game outside of the stat sheet. Anderson makes everyone’s life so much easier on Alabama’s defense. I didn’t see that first couple of weeks. I love that.